West Chickenbone Lake to McCargoe Cove:
The Best Day Ever!

I awoke with the confusing feeling that I had somehow fallen asleep in my tent in a strip mall parking lot under a bright streetlight. An owl hooted and I checked my watch. It was 4:00 am, and I remembered that I was in the woods, not preparing to buy a Nintendo Wii at Best Buy the morning after Thanksgiving. Where was that bright light coming from? 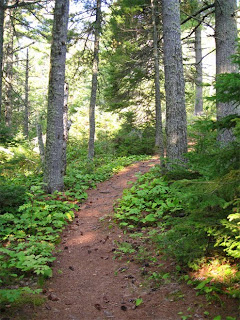 I twisted my head around to look out the window and found the moon beaming down on our tent like a spotlight shining out of an otherwise pitch black sky. Wide awake, I spent the early morning in my sleeping bag listening to owls and loons conversing with the forest around Chickenbone Lake. At 5:30 am, a wolf started howling. This time, it sounded much closer than the distant chorus we had heard a few days before while hiking on the Rock Harbor Trail. My hand hovered above Craig's arm, ready to alert him should it happen again. Suddenly, multiple canine voices were everywhere. I shook Craig awake and we both held our breath and listened to this nearby pack of wolves howl under the bright moon. It was a moment to remember.

As suddenly as it started, the howling stopped and the woods went quiet. Neither of us could fall back to sleep after that, and as soon as we detected the slightest lightening of the sky, we left the tent to start our morning routine. Chickenbone Lake was shrouded in fog which went from gray to pink as the sky lightened. I imagined a canoe floating from shore toward the small island in the distance and disappearing from view as the fog swallowed it up. It would have been a wonderful, spooky time to paddle out into the quiet water.

Dew clung heavily to everything, so it was necessary to pack up our tent while it was wet. Heading out of the West Chickenbone Lake campground, Indian Portage Trail swings west and crosses a stream before curving back north and hugging the edge of the lake for almost two miles. Our destination was McCargoe Cove on the north shore – a distance of just under three miles. We anticipated a short day of hiking followed by what we hoped would be another relaxing campsite similar to what we had at Moskey Basin a few nights before.

Since the brush along the narrow trail was dripping with dew and leaning inward, it wasn't long before we were both soaking wet from hip to ankle. Ten minutes after leaving our campsite, the ground became marshy and we found ourselves walking a long stretch of protective plank bridge. Just before reaching the stream crossing, the trail curved to the right and Craig suddenly stopped in front of me, turned around and said very calmly, “Uh...a whole pack of wolves...” 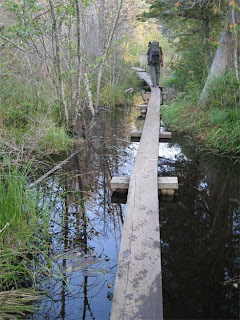 His voice trailed off as he turned back around to face forward again. I thought he was trying to be funny since I couldn't yet see what was around the corner. After inching forward another foot or so, he turned to me again and the look on his face was priceless. “I'm not kidding,” he said. “There are at least five wolves on the trail ahead of us.” The next few moments were the most surreal and exciting I've ever experienced.

Afraid I would scare them away, I crept forward as quietly as I could. We could not stand side by side due to the narrow footbridge, but I could see them once I stopped directly behind Craig. Before I had caught up, he witnessed two wolves dart into the woods from the trail. Three were still there, and of these, a big gray one was clearly in charge. He looked directly at us and stepped forward on the bridge. It looked like he was ensuring that his pack could cross the bridge behind him into the safety of the woods while he kept an eye on us. Another gray wolf ran behind him into the trees, then a tall brown one moved forward to stand behind the first one. The two of them simply stood there and watched us.

No one had any idea what to do – including the wolves, it appeared. Everything we had heard and read said that wolves avoid humans and will run when they get wind of people. Fleeting glimpses are all anyone is usually lucky enough to see. There are specific things hikers know to do when encountering bears in the backcountry, but what about a wolf pack? What is the etiquette in this type of situation? There was no passing lane; who had the right of way? Do we offer intel, like the coordinates of where we saw that lone moose the day before, as a kind of bridge toll? Should we get out our wallets and show them pictures of our dogs? It was unreal, and we just stood there dumbfounded.

I wondered if we should give them space and retreat the way we came, but Craig felt that was a bad idea, so we just continued to stand there trying to look casual. Then, looking right at us, the leader slowly took four steps closer then stopped again. At this point we were holding our breath and really not believing what was happening. It felt like a dream; it was, literally, the wildest thing I've ever seen. There was clearly no question about who needed to respect whom in this scenario, but I did not feel scared. I think I was too shocked and amazed at our luck. It was the most exciting moment I'd ever experienced.

Apparently satisfied that we were not a threat, the two of them stepped off the bridge and spent a few seconds debriefing next to the trail before nonchalantly strolling into the woods. We waited for several seconds before continuing on the bridge. When we walked past the spot where they had disappeared, we were convinced we were being watched by many well-camouflaged eyes. We had seen five of them, but wolf study information at the time stated that the current packs ranged in size from 2 to 9 members, so there could have been more.
Although it had seemed like we were locked in a stand-off for several minutes, in reality the whole thing was probably over in under one minute. The wolves were tall and similar in size to our 80-lb German Shepard/Lab mix, but with longer legs. As soon as I saw them, I quietly took out my camera and snapped three photos in succession without giving it time to focus. It was then or never. The shots I ended up with consist of one gray blur in the trees, one photo of Craig - eyes like saucers - with the barely discernible form of a wolf ahead of him looking in the opposite direction, and one blurry shot of the (assumed) alpha and the brown wolf backing him up (see above). It's better than nothing, and I was actually just happy that I didn't accidentally step off the bridge and make a fun, prey-like spectacle of myself in the muck below.

The rest of that morning's hike is mostly a blur due to the excitement we both felt. We stopped every fifteen seconds or so to re-tell the story to each other and confirm that it actually did happen. I do remember that the trail was very pleasant, with Chickenbone Lake to our immediate right most of the way, and we passed a beaver dam at some point. The happy mood we were in prevented us from getting the slightest bit bothered by how wet we continued to get from the dewy vegetation, and before we knew it, we arrived at McCargoe Cove.

It was only 9:30 am, and once again we had the place practically to ourselves. We met a lone backpacker who had been hiking the length of Isle Royale via the Minong Ridge Trail, which is known to be difficult. He had started out hiking from Windigo with his brother, who quit after the first day. Although the shelters here were not right on the water, ours had a nice view of the cove, and a large dock provided a good space to lie in the sun after braving the frigid water. (I was not actually brave at all and made quite an ass of myself trying to get in without actually getting in.) Later in the afternoon we would end up spending a couple of hours just sitting on the dock watching loons swim on the smooth glassy surface, and staring mesmerized at the perfect reflection of trees on the opposite shore.

The remains of an old copper mine provided a fun, 2-mile roundtrip day hike just west on the Minong Ridge. We brought our headlamps (totally unnecessary) and ventured down into the old mine shaft, which still has a section of train track previously used to cart the mineral deposits out. Being a card-carrying rock nerd, I could have easily spent a couple of hours investigating the dark wet cave, but we returned to our shelter to make lunch and re-live our wolf encounter ten thousand more times.

To be continued in: Day Six - McCargoe Cove to Daisy Farm
More photos from this trip can be seen here.
Posted by Nina at 7:14 PM

Awesome! An entire pack. I envy you both.

Just discovered your site via backpacker.com. Love it! A group of us spent 6 days there along the Minong in mid-August.

Have you ever heard of SOLAR? SOLAR Outdoors

Simply amazing. Thanks for sharing.

Great story - sounds like an awesome trip. I saw one lone Black Bear cub in the Smokies this past week, but a whole wolf pack?!? Priceless. I'll be back.

Great trip report, Have enjoyed every minute! Thanks for sharing. I too look forward to going to there soon. Thanks so much!

How exciting! What an awesome experience. I've yet only HEARD a wolf howl (while canoe-camping in the Boundary Waters) but have never actually seen one. I think you're very lucky.

And, by the way, I love your writing. I came here from a post on Twitter and am glad I did! Wonderful story.

Hey Nina...what great stuff, maybe once in anyone's lifetime. Like I saw a rabbit the other day. Nice to be with you.

Whoa - a rabbit? I would be careful.
They can’t be trusted.

I found your blog from a blog from a captain of a ship that takes people to Isle Royale while investigating the potential of backpacking in Isle Royale. I have way enjoyed your posts, specially this one with the wolf pack. Thanks!!

I love your photo of the Minong Mine (Isle Royale Day 5). Could I possibly have your permission to use it in a book on the Copper Country I'm publishing.

Mel,
I just sent you an email regarding your request. If you do not receive it, please post another message here with another way that I can contact you regarding the photo. Thank you!
-Nina

Hoped to see the saucer-eyed pic. :(

Anonymous,
Yeah - he's not a big fan of having pictures of himself posted, unfortunately. Maybe you can help me talk him into it!