After returning to Seward, we spent a day outside of the national park to go flightseeing over Lake George Glacier and Colony Glacier.  This was a spectacular experience, but because I am keeping this part of the trip report about Kenai Fjords National Park, I will write about it at a later time.  Skipping ahead one day…

We woke up early on Saturday and drove to the Exit Glacier area of the park, which is the only part accessible by car.  We planned to join a ranger-led hike of Harding Icefield Trail, an 8.2-mile roundtrip hike up a mountain and back down, much of it alongside Exit Glacier.  At the top, the Harding Icefield itself can be viewed, its 700-square-mile expanse stretching as far as the eye can see*.  The icefield was formed during the Pleistocene Era and is the source of the many glaciers that flow through Kenai Fjords National Park.  It is thousands of feet thick, with just the peaks of some mountains poking through.  We are fascinated by these types of geologic formations, and were very excited for this hike, despite the terrible weather that greeted us that morning. 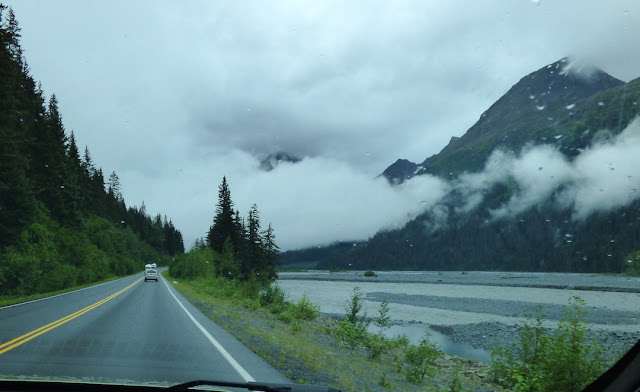 We arrived at the Exit Glacier Nature Center just before 9:00 a.m. and were surprised to find a sizable group of people prepared to hike in what one of the rangers referred to as “the monsoon.”  It was cold, raining, and windy as we left the shelter of the nature center and began hiking through the forest at the valley floor.  At the start of the trail, we passed what would be my favorite sign of the trip—a warning to visitors with respect to bears, with some noteworthy instruction concerning grizzlies.

Like most hikers, I’ve of course considered what could happen if I were to encounter a bear and things went badly.  But never quite with this level of detail.  This warning is not subtle; I could analyze the specific words used for hours.

“If it starts to eat you fight back.”

Starts to eat you.

Starts.  Not ‘tries’ or ‘attempts.’  We are apparently past that.


Eat you.  Not, “if it gets aggressive,” or “if it bites you,” or something less blunt and more open to whimsical interpretation.  I mean, seriously.  Think about that for a minute.  Or for several months like I have.

Fight back.  The opposite of what it says to do in the sentence directly preceding, which does not inspire confidence in the sign's leadership.  However, I suppose if a grizzly has begun eating you, continuing to play dead would be counter-productive and, I imagine, quite challenging.  You may as well give fighting a try because then maybe you will at least be accepted into Valhalla.
The hike is strenuous due to the trail’s elevation gain of 4,000 feet in 4 miles, and it typically takes 6-8 hours to complete.  Starting in the forest at the foot of the mountains, it meanders through a variety of landscapes on its way above treeline and to the top of Exit Glacier.  The rain made the trail muddy and slippery, causing the trip to be more of a soggy, grueling trudge instead of the invigorating, photogenic hike that I envisioned.

The higher we climbed, the colder it got, and we stopped a few times on the way up to switch or add layers of clothing. The group was being led by two rangers, and around the half-way point one of them guided those who wanted to turn around (about half of the group) back down the mountain, while the rest of us trudged on.  I couldn’t blame them; not only was it cold, wet, and tiring, but around this time the ranger voiced what I had been fearing: there wasn’t much hope for visibility at the top.
As we neared the top, the landscape took on a bleak quality, and fog lingered everywhere in the distance.  A small emergency shelter sits in the middle of the bleakness about 10 minutes from the top, and everyone took advantage of it, temporarily getting out of the wind, adding layers, and resting.
Of the view at the end of the Harding Icefield Trail, the National Park Service website states, “At the top, the view is unlike any other: Mountain peaks enshrouded with ice stretch off into the distance…” and offers various photos of the magnificent sight.  (http://www.nps.gov/kefj/learn/nature/the-harding-icefield.htm)
*The “as far as the eye can see” view I spoke of earlier turned out to be about 20 inches in our case due to the weather conditions.  Oh well.  Next time I’m in the neighborhood and it’s sunny, I’ll try again.


Because of the unfriendly weather conditions and lack of view, no one lingered at the top.  After squinting into the fog beyond the end of the trail for a minute or two to savor the spectacular anticlimax, we began the decent.  Everyone went at their own pace on the way down, breaking up into smaller groups to wander back down the muddy trail.  Andrea and I took our time; despite the unfriendly weather, it was still incredibly beautiful.  Not being able to see the icefield was disappointing for sure, but the trail led us through a gorgeous landscape, with Exit Glacier just off to the side, enormous and blue.  We were cold and wet, but we wandered back down the trail at a snail’s pace—partly out of caution due to the slippery trail, but mostly to take everything in because we were in Alaska for shit’s sake.
I am truly amazed that my camera functioned after this hike.  On the way up, I took just a couple of photographs, leaving my camera in a Ziploc bag in my backpack in an effort to keep it dry, and also to focus on the demanding, slippery hike.  On the way down, however, I gave up trying to keep it dry, photographing everything around me, from the glacier in the distance, to the squished remains of a large pile of bear scat on the trail that someone had managed not to notice, stepping in it and leaving a boot impression that was filling up with rain water.  From majestic glacier to sodden bear poop, it was all beautiful. 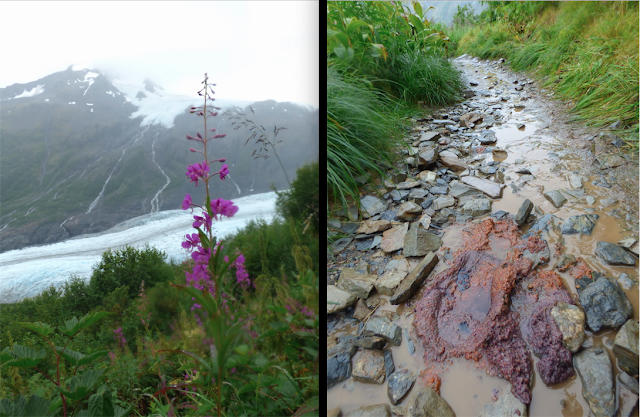 We finished the hike around 3:45 p.m., returned to Seward and stopped at The Rickshaw—a food truck selling a variety of Asian dishes—for something to tide us over until dinner.  We ordered lumpia, which was warm, crispy, and delicious, then returned to our cabin to change into dry clothes.  Dinner was at Seward Brewing Company, after which we walked around town for a little while before returning to the cabin.  We were in bed by 9:30 that night, thoroughly exhausted.

The following day we would leave the Kenai Fjords area and drive north to Denali to experience a dramatic change in weather and landscape, and the final phase of this amazing trip.
This is the end of the Kenai Fjords National Park portion of this trip to Alaska.  The other adventures—glacier flightseeing and a short trip to Denali National Park—will be written about later.  Stay tuned!
Posted by Nina at 9:04 PM

Yay! I'm glad you're blogging again. I'm looking forward to whatever other adventures you end up writing about. This hike sounds pretty miserable, though.

Wow! Thank you so much for the incredible photos and fascinating commentary.

We took the same trip minus the KFGL; Flight to Anchorage, AK railroad to Seward, Day trip to Holgate glacier, Sea Life Museum, Exit Glacier trail. The KFGL sounds wonderful; guess we'll have to go back!

We also went to Denali; Camped at Wonder Lake, Three nights at KAT lodge in Kantishna, Flightseeing around Denali. I'm looking forward to the rest of your report!
Bob (Jackson, MI)