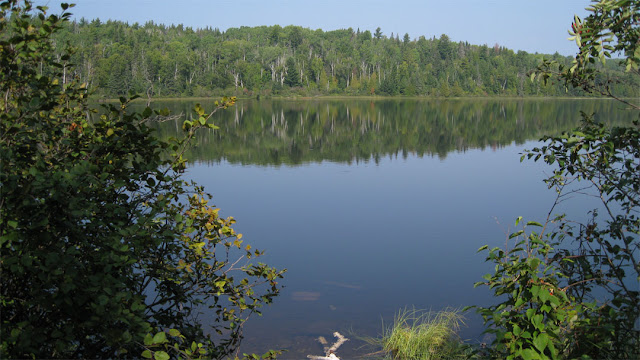 Moskey Basin is known for its sunrises, and although the morning started off a bit cloudy, we were not disappointed. We went about our morning routine at a leisurely pace, and once oatmeal and coffee were consumed we discussed our day's route. We had two possible destinations: Lake Richie or West Chickenbone Lake. Both are inland lakes known for good fishing and moose spotting potential, and each offers only a small number of tent sites. We decided to roll the dice and just see what happened. 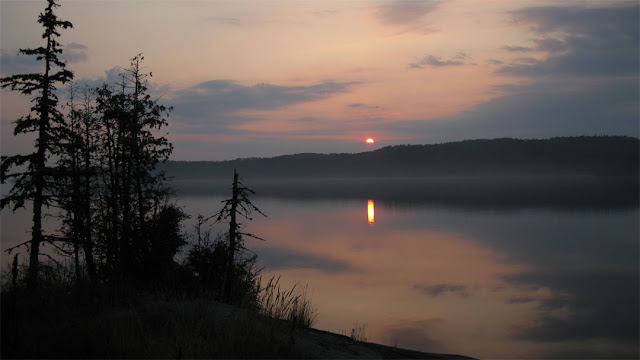 We backtracked to the trail intersection and headed west on Lake Richie Trail which brought us to the campground in just under 2.5 miles. Lake Richie is a favorite spot for canoeing and fishing, but the drawback is that the campsites are located away from the lake and up a ridge. While the lake is picturesque and dotted with small islands, all of the campsites appeared to be in direct sunlight, and on this warm sunny day there would be no chance of shade until evening. We stopped in one of the campsites to eat a snack and make a decision. While Craig munched on trail mix, I visited the outhouse. It was terrifying. 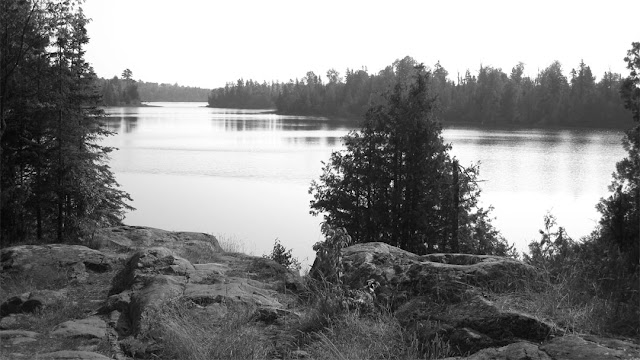 
A side note on going to the bathroom in the woods: I feel a bit prissy complaining about the outhouse, so let me explain. When we first began planning this trip, we figured that the Isle Royale backcountry bathroom experience would consist of digging holes and bringing our own TP.  We are not unfamiliar with this form of dehumanization; however, later on in the planning stage, we were happy to learn that there were pit toilets located at all campsites. Once on the island, the clean state of the facilities at our first three locations made us very happy. We became spoiled. 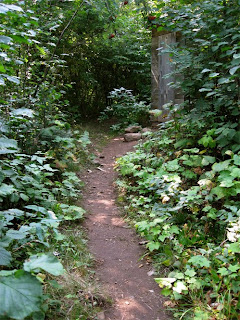 After detouring to a private spot in the woods, I returned to the campsite and reported my grim bathroom findings. It was only 10:30 am, and we decided that we didn't want to spend an entire day in the open sun. If we had a canoe for exploring the lake we might have felt differently, but we decided to keep going and try our luck at West Chickenbone.

Lake Richie Trail ends at Indian Portage Trail which follows the north side of the lake for a little over ½ mile. Indian Portage Trail runs the the width of Isle Royale from north to south and connects the opposite shores of the island via four inland lakes and a handful of canoe portages. A hearty person could paddle a canoe up Chippewa Harbor to the south, then paddle his/her way north through Lakes Richie, LeSage, Livermore, and Chickenbone before re-entering Lake Superior through McCargoe Cove to the north.

Portaging a canoe is nuts. Once heading north on Indian Portage Trail, we crossed paths with a park ranger whose head was hidden inside the upside-down canoe balanced on top of his shoulders. He asked us for our names as we passed him. “I like to make a mental note of who I encounter out here in case of an emergency,” his voice echoed down to us. I have no idea how he could see where he was going. A bit further north, the trail hooks around Lake LeSage, then begins to climb some ridges. Here, another canoe portage follows the trail and creates a connection with Lake Livermore. This stretch included a descent so steep it took me several minutes (only with slight exaggeration) to navigate it relying heavily on my trek poles for balance. I had recently sent the poles back to Leki for repairs; if one of them had collapsed, I would be dictating this from a full body cast. Portagers would have to scramble up or down that segment while hoisting a canoe. To us it seemed impossible, but one person we met along the way assured us that the canoeing experience on Isle Royale is worth the work involved. 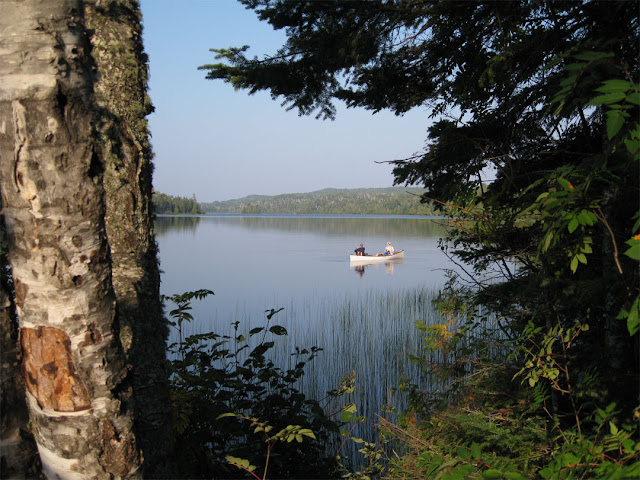 The trail hugs the marshy west end of Lake Livermore before ascending the Greenstone Ridge. Rounding the narrow end of the lake, something caught our attention through a window-like opening in the trees. An unidentifiable big brown object stood in the water on the opposite shore. We stood there for several minutes when the thought occurred to each of us simultaneously that we might be a couple of idiots staring at a large overturned tree. As soon as Craig gave up and started to move on, the tree moved its huge head. MOOSE! I was so excited I nearly fell off the narrow footbridge we were standing on. It was far enough away that we couldn't tell whether it was male or female, and it wasn't until we returned home and could view the enlarged photo that we were able to see antlers. 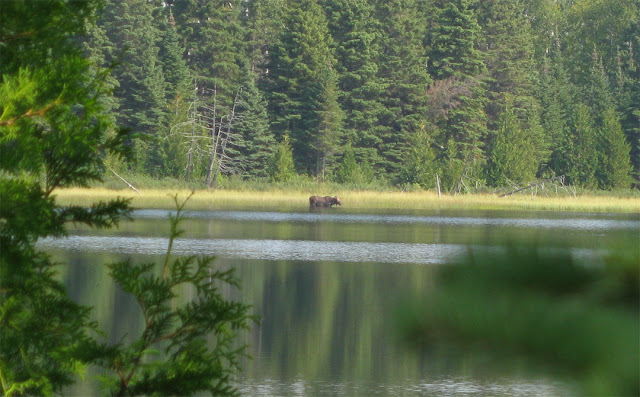 A bull moose cooling off in Lake Livermore

We left our moose window and began to climb the Greenstone, which was not nearly as steep a climb here as in other places. Once at the top, beautiful glimpses of Chickenbone Lake could be seen through the white birch trees. Here, the trail descends steeply and passes a group campsite on the way to the individual sites at the lake's edge. We saw the 2 young hikers we had met leaving Lane Cove on our second morning. They had ended up taking 2 days to get to Chippewa Harbor, and were currently hiking the 10.6-mile length of Indian Portage Trail to McCargoe Cove. West Chickenbone was a convenient place for a break along the way. 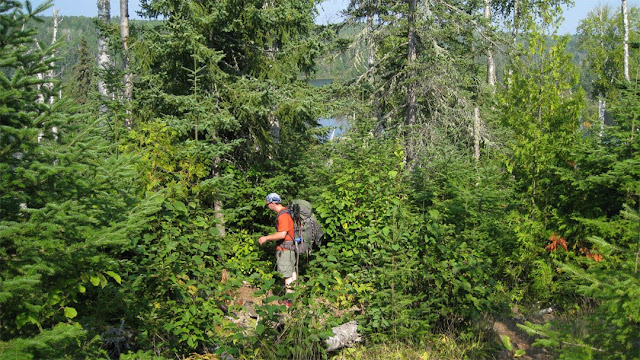 A glimpse of Chickenbone Lake while descending the Greenstone Ridge

Chickenbone Lake is shaped like a chicken wing and the west campground offers six tent sites. After some debate over location, we settled in and took a swim. The pit toilet here was a horror show which Craig advised I not attempt to use if I could help it. A sign hung in the outhouse explaining that the facilities further inland can't receive as much attention as the others, which makes perfect sense. A very bold and chatty squirrel took up residence in our site and proceeded to pester us for the duration of our stay. Known for chewing through both tent and backpack in search of food, we had read about these tiny menaces which are closer to chipmunks in size and unique to Isle Royale. After it engaged Craig in a game of chicken around our Nalgene bottle, we decided to hang our food as a precaution. 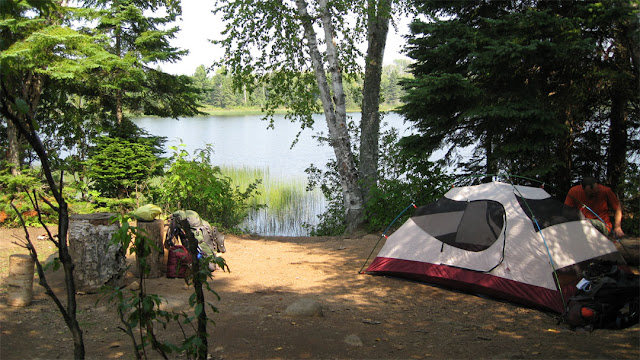 Our campsite at West Chickenbone Lake

The only tree with an adequate branch for hanging food was located at the water's edge. Our minds got carried away with an elaborate fantasy of a moose wandering through our site in the middle of the night, heading toward the water, hooking an antler on the hanging bag, and dragging our food supply out into the lake. The squirrel watched the entire food hanging process with disturbing intensity, chattering loudly the whole time. We kept our fingers crossed that it would retire for the night and leave our packs undisturbed under the tent's vestibules. In the end, all was safe and the squirrel entertained itself by chasing a snowshoe hare back and forth through our campsite until dark when we all went to bed. 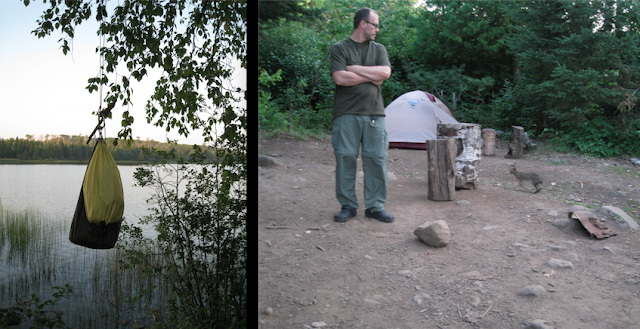 To be continued in: Isle Royale Day Five: West Chickenbone to McCargoe Cove

More photos from this trip can be seen here.
Posted by Nina at 7:37 AM

The portage trail from Lake Livermore bypasses the steep descent into Chickenbone. There's no need to risk your neck carrying a boat down (or up) that monster.