Castle Trail/Medicine Root Loop
4.22.15
It was still a ghost town at Cedar Pass Lodge when we left our cabin on our third morning at Badlands National Park. Once again we walked over to the Cedar Pass Restaurant for breakfast before heading to the trailhead. We planned to hike Castle Trail, an out-and-back hike by itself that can be combined with another trail—Medicine Root Trail—to make a loop of 6.6 miles.  It’s a nice day hike provided the weather isn’t too hot, which...you know.


The weather today was actually much better. Although it was still windy and freezing in the morning, it was sunny and the temperature would eventually rise into the 60s in the afternoon. We started out hiking in warm layers and wool hats, but eventually we were able to take our jackets off as it warmed up.

We returned to the parking lot where most of the park’s trails are accessed and found only a single car parked in its long expanse and no other sign of human activity.  Two turkey vultures were perched high on the Badlands Wall. Lurking. Waiting.


At the beginning of Castle Trail, there is a bulletin board with trail descriptions and safety information regarding heat, dehydration, the lack of shade or water on the trails, cacti, and rattlesnakes. There is also a backcountry registration box for those venturing into the backcountry. Backcountry camping does not require a permit here, and backpackers can set out off-trail and camp anywhere in the park.  There are no trails to follow in the backcountry, and due to the severe nature of the landscape—extreme heat in summer/cold in winter, violent summer storms, non-availability of water anywhere within the park—exploring far into the backcountry should be attempted only by experienced, well-prepared hikers.


The backcountry registration box had been defaced—with good intentions—by other hikers.  Scribbled notes regarding Castle Trail offered pointers on how to avoid getting lost immediately. This appears to be a frequent occurrence; messages scrawled with escalating urgency gave advice like “Go left,” “Look up,” “Don’t go down river bed,” and “Don’t proceed until you see red marker,” and were accompanied by “Listen to these people,” and “Pay heed people!” with arrows pointing to the previous notes. This stood out as not run-of-the-mill graffiti, and it grabbed our attention.

Paying heed as directed, we took a minute to look around, stopping ourselves from proceeding to the right, down what looked deceptively like a trail but was likely the riverbed mentioned in one of the cautionary notes. We looked to our left and eventually spotted the first red trail marker up a hill in the distance. 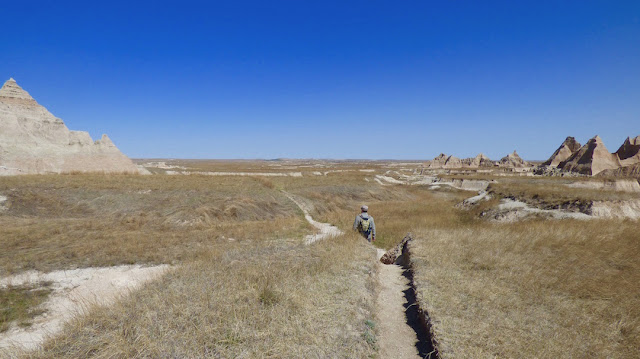 Castle Trail starts out in a dry grassy area, winding past the occasional rock formation. Before long the formations become more frequent, sometimes appearing majestic, rising in pyramids and turrets, and other times looking decrepit, like an unearthed, ancient crumbling canyon.

The trail itself follows pretty easy terrain; there are some rolling hills, but no steep climbing. The ground can be a bit rough, and prickly pear cactus grows within the grass in some areas (not to mention rattlesnakes can be present when it’s warm), so appropriate hiking shoes should be worn.  We saw several female bighorn sheep throughout the hike, and they watched us with cautious curiosity. Only four other hikers crossed our path. 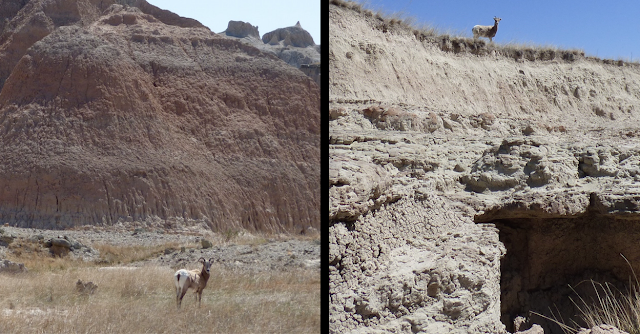 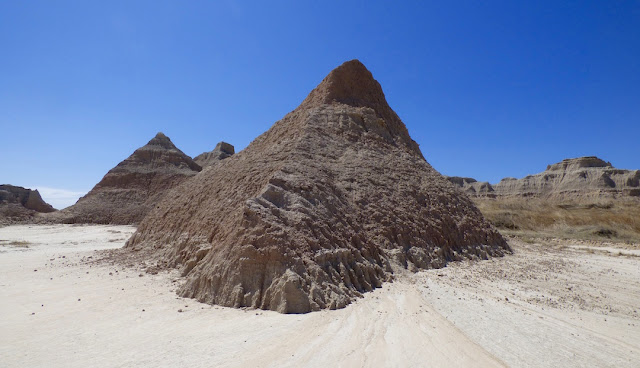 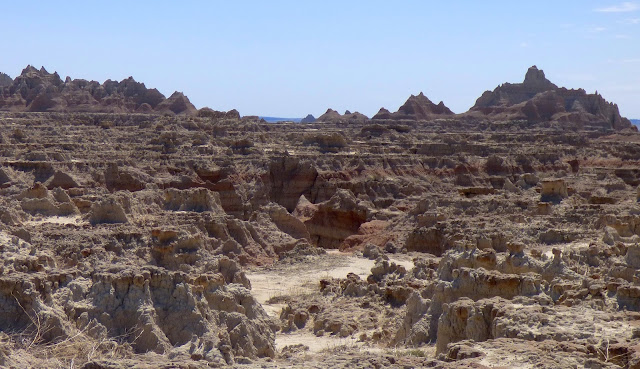 Around three miles in, at the intersection of three trails—Castle, Medicine Root, and Saddle Pass—we headed northeast on Medicine Route Trail to begin the loop back.  This trail guides hikers through a flatter, grassier area, with Badlands formations to the south, and prairie to the north.  It is interesting hiking between these two extremes; the jagged peaks and spires of the Badlands formations in the distance on one side, and on the other side, a mostly empty, flat grassy expanse. 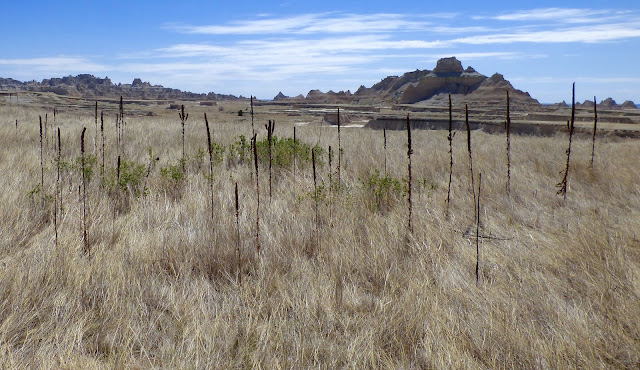 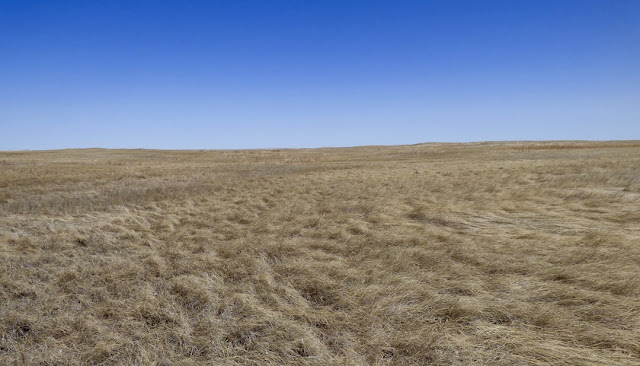 Standing out oddly in a landscape otherwise devoid of such features, fields of a variety of rocks suddenly appear in a few locations on both Castle and Medicine Root Trails.  These rocks do not look like they belong; it is as if they were dumped here from another location and then spread out across a few open areas.  After doing some reading of the geological information available on the NPS website, it appears this actually is the case.  If I understand correctly, these rocks are part of what is referred to as “Medicine Root Gravels”: rocks that were carried here from the Black Hills and deposited in this area a few million years ago by fast-flowing rivers.  (If anyone knows of another explanation for the existence of these rocks, let me know.  But I will probably cover my ears and not listen because this scenario is mind-blowingly fascinating to me.) 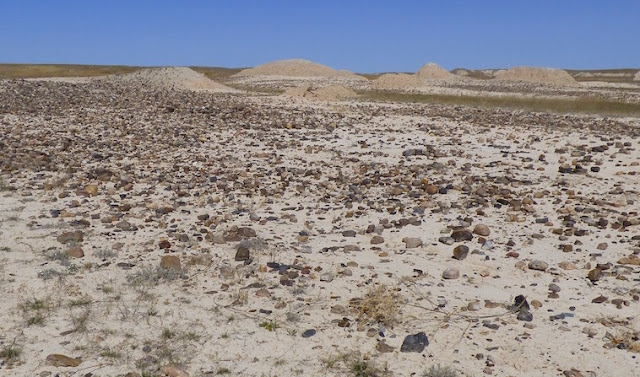 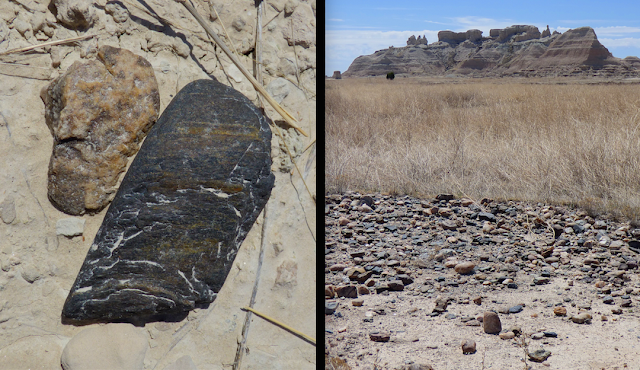 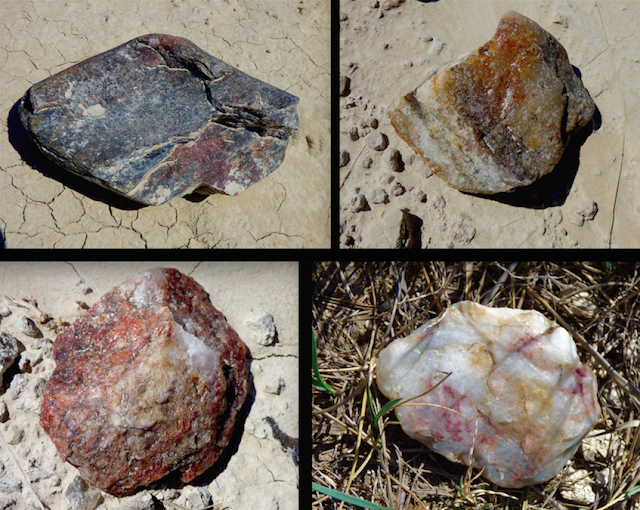 There was still just one other car in the trailhead parking lot when we got back.  When we returned to Cedar Pass Lodge, we discovered another cabin was now occupied.  This place was getting far too warm and crowded; it was time to go.

We decided to stay at our cabin for dinner, and we dug into the contents of our box of camp food for various meal options.  I chose my favorite dehydrated meal, Mary Jane’s Farm Chilimac, which I prepared on our front porch with our Jetboil stove.  It was still windy, but the sun was warm, and I stayed outside on the porch for as long as I could tolerate the wind and I started developing a nice sunburn above the v-neck of my t-shirt to compliment my windburned face. 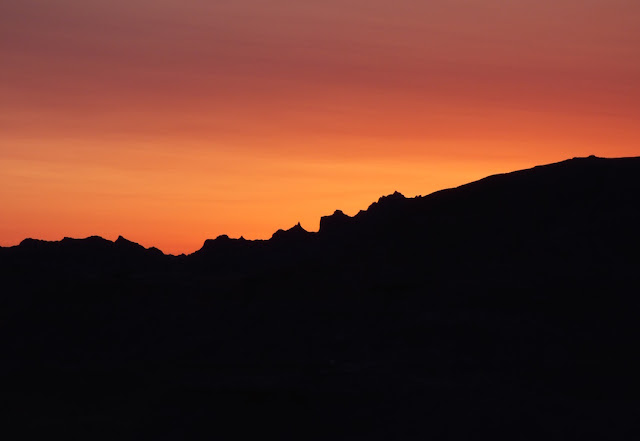 As was the pattern on this trip, the wind died down in the evening, and I walked around the Cedar Pass area, enjoying the surroundings on our last night in the park.  The grassy area across the road from Cedar Pass Lodge was a good spot to watch the sunset, and I watched the sky turn magnificent shades of orange behind a silhouette of Badlands peaks. Afterwards I returned to our cabin and sat outside as the sky darkened and the crescent moon rose, and watched stars break out across the black expanse of the big sky.

We left Badlands National Park the next morning, taking a northern route home through South Dakota, Minnesota, Wisconsin, Illinois, Indiana, and finally Michigan.  I fell in love hard in Madison, WI with a huge black Labrador retriever that was waiting patiently outside Gotham Bagels, wearing the most solemn expression I’ve ever seen on a dog.  A year and a half later, I’m still not over it.