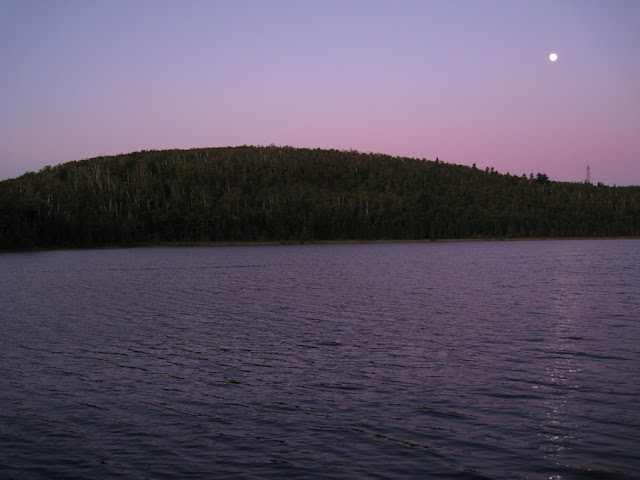 
After a restless night without much sleep, I woke up for good at 6:30 a.m. and listened to loons calling on Egge Lake. A full moon hung in the sky above the lake, and it was very cold. Bundled up in fleece jackets, hats, and gloves, we made breakfast before packing up and heading back onto the trail at 9:00 for a nice, cold morning hike. 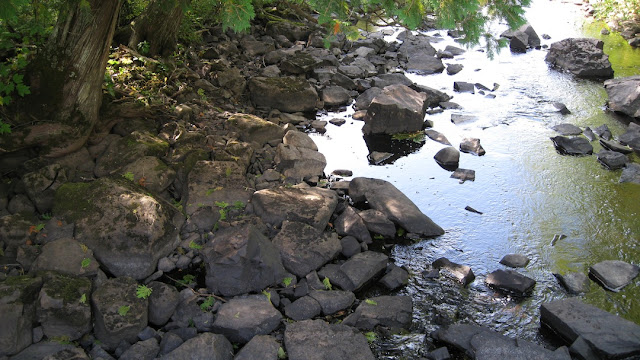 Our destination was Section 13 Campsite, located at the top of the steep Section 13 Cliffs, which is a popular spot for rock climbers. Although we still did not have any views of Lake Superior, the trail was very scenic and interesting throughout the entire day. We crossed the Baptism River again and passed an old bear den which was marked with a sign. It was cold, but the sun shone through the trees, creating a beautiful green glow all around, with the occasional splash of fall color jumping out. 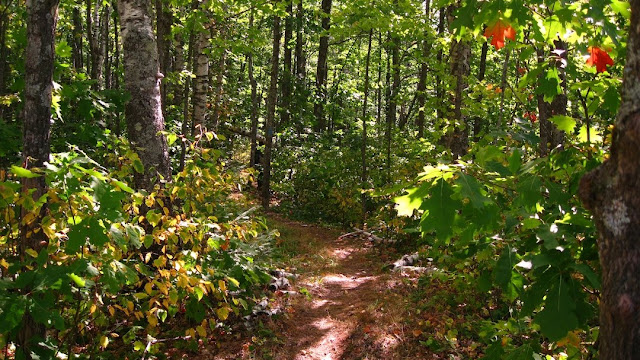 We stopped for lunch at Leskinen Creek Campsite, which is spacious and could fit several tents. The temperature remained somewhat cold, the sky became overcast, and the wind picked up again as we sat on a bench by the fire ring, cooking and eating Mary Jane Farms' Chili Mac. We did not linger there long, as the weather was becoming increasingly temperamental, and we wanted to make it to the next campsite as soon as possible. 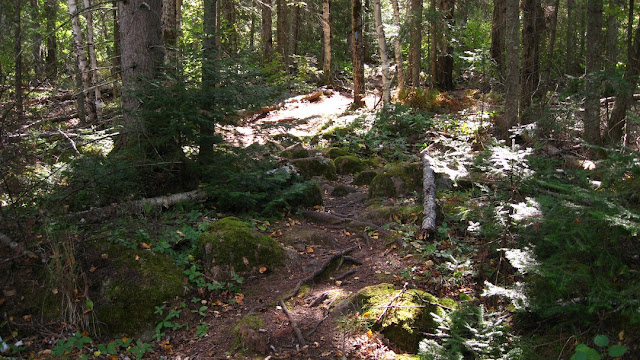 There were many more steep climbs along this section of trail than during the previous two days, and a lot more scenery to enjoy as a reward. At one point, we climbed up a long, steep stone staircase surrounded by trees, which darkened the path and made me think of the perilous, never-ending hidden staircase of Barad-dur. The trail skirts an enormous boulder, which was left behind by a retreating glacier at the end of the last ice age. It is a couple stories high and was a definite trail highlight. 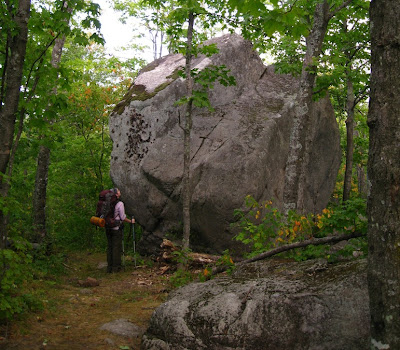 We traveled across a few bog areas, and crossed a large beaver pond called Sawmill Pond on a long stretch of boardwalk. A trail register is posted at one end, and someone had recorded details in it of a bear sighting at the pond the day before. The only wildlife we would encounter that day was a grouse that scared us when we accidentally flushed it next to the trail. Just before I finished crossing the pond, it began raining. I put my camera away for safe-keeping, and missed the chance to get a picture of the beaver lodge, which eventually came into view. The rain didn't last long, but came and went several more times throughout the day, causing us to put our rain gear on, then remove it a few minutes later on more than one occasion. The sky was filled with dark, menacing-looking clouds, and the wind had continued to get stronger, leading us to believe we were in for a storm, but so far it had been just one false alarm after another. 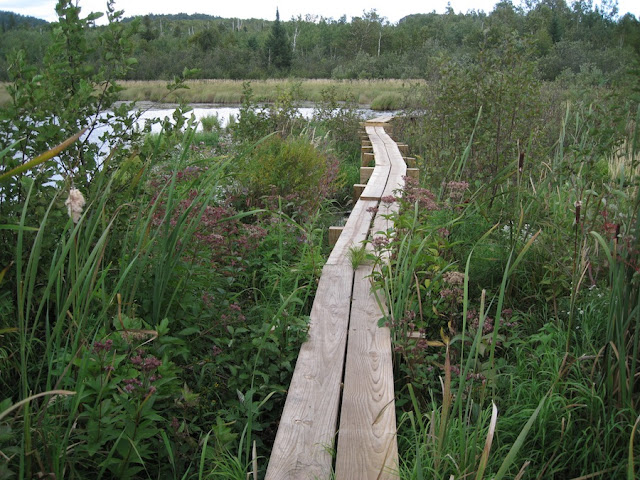 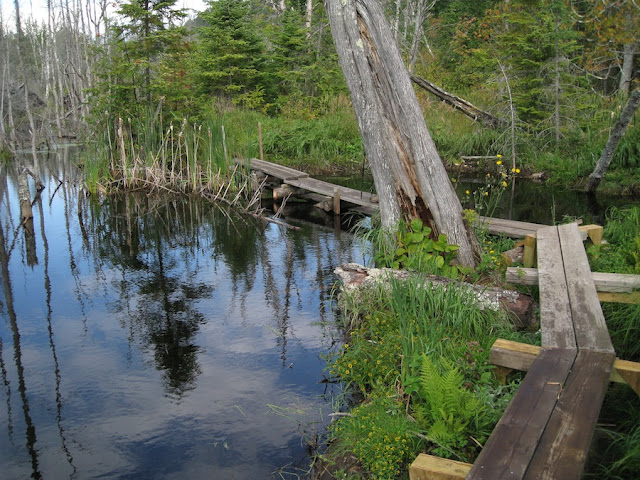 There is no water access at Section 13 Campsite, but according to the guide book, there is a stream ½ mile north and another ½ mile south of camp. We did not want to rely entirely on these streams having water (many of the streams we had encountered so far were dry), so we stopped for a little water at a stream we crossed earlier in the day. If the streams near Section 13 were flowing, we would be able to collect more for cooking; if not, we would at least have enough to drink until finding more the following day. We eventually climbed to the top of Section 13 cliffs and reached our campsite at the top. The first of the nearby streams had been bone-dry, and by the time we reached camp, the weather had become frightening. It sprinkled off and on, a storm still threatening but holding back; however, the wind howled and was so strong that I was afraid to get close to the edge of the cliffs. 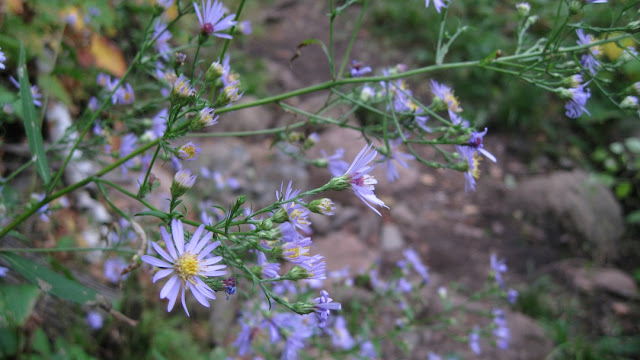 Aster along the trail near Section 13 Cliffs

We rested for only a short time before determining a good spot for our tent and quickly setting it up, staking extra guyout lines for the rainfly just in case. I had been excited about camping in this high spot with its amazing views, but my excitement began wearing off as the temperature continued to drop, and I watched the towering trees swaying in the wind all around our tent. Unfortunately, I would not be doing much exploring of the cliffs or drinking hot chocolate by a fire, which I had been fantasizing about all day. 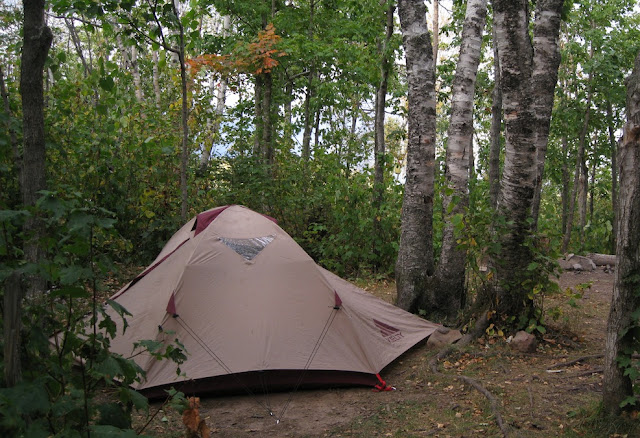 It was only 4:30, and despite the weather and the day's strenuous hike, I was feeling energized and volunteered to hike to the next stream, an alleged ½ mile south. I put my winter hat and rain jacket on, grabbed one of our Platypus water containers and headed out. Almost immediately, I found myself on top of a bald where it is possible to take in a spectacular 360º view of the surrounding forest, river valley, and other cliffs. The intense wind prevented me from spending much time here, however, and I returned to the trail and my quest for water. It began raining, and the wind drove the cold drops sharply into my face until I began descending into the woods, taking cover under the trees. 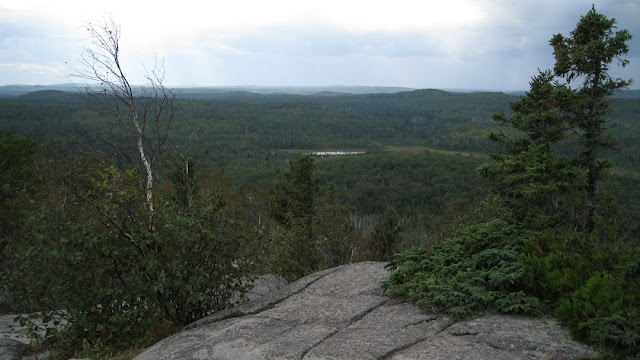 Looking out from near the top of Section 13 Cliffs

The trail descends very steeply here and there was no stream in sight. I hiked on, thinking that maybe it would be just beyond the next hill. Then the next. This went on and on until I was certain I had hiked further than a half-mile. At this point, I could see far enough ahead to determine that this supposed stream was either dry or a total fabrication. Turning around, I began the steep climb northward back along the trail toward camp. By now it was extremely cold and the wind was brutal. With only a small supply of water and the unpleasant weather, we skipped cooking dinner and just ate a quick snack before hanging our food bag and retiring to the tent. By 7pm we were in for the rest of the night. I had wanted to return to the excellent vantage point just down the trail to take some photos at sunset, but the sky was so overcast at this point that there would not have been much of a view. I crossed my fingers that the morning would be better, changed into heavier wool socks, long underwear, and a long-sleeved Smartwool t-shirt, and settled in for the coldest night of sleeping I had ever experienced (until the following night). 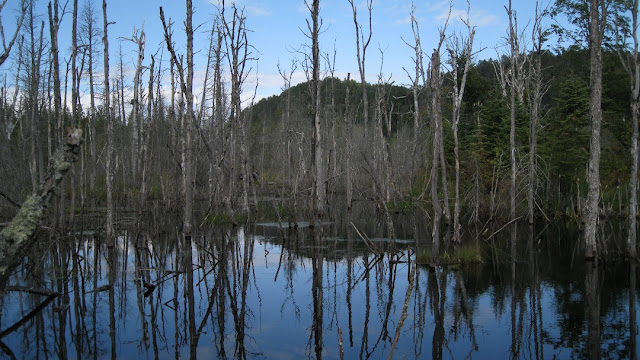 Thanks for continuing the story, Nina! Don't want you to think your labor of love is ever for naught - tho I'll likely never make that trek myself, I really like reading about (and seeing) yours.

Richard,
Thank you for your comment. I'm glad you enjoy reading the long-winded reports!

Looking forward to the next one, and living vicariously through your session reports -- as always!

I LOVE reading your accounts...it IS like being there with you.
One thing about hiking...it is ALWAYS different. B.

Your "reports from the trails" are something I look forward to reading. Excellent as always.