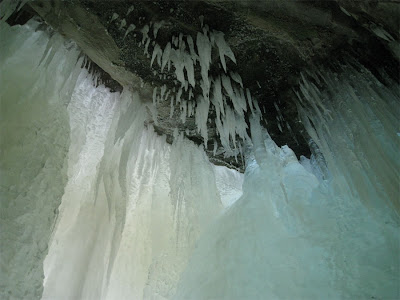 I recently returned from three days of snowshoeing in the Upper Peninsula with my sister, Andrea. We dubbed our trip 'Frozen Ice Crystal Palace Adventure 2010'. In addition to being fanatical rock nerds, we are also certified ice geeks and had been looking forward to visiting some icy hot spots in the far north of Michigan. 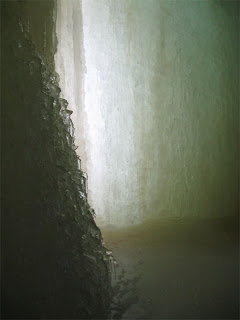 Our first destination for FICPA 2010 was the Eben Ice Caves, located in Rock River Canyon Wilderness in the western section of Hiawatha National Forest. Rock River Canyon is 150 feet deep and lined with sandstone outcrops, which have been eroded to form concave overhangs. During winter, ground water seeps over the edge and down through the sandstone where it freezes, creating huge curtains of ice and closing off the front of the outcrops to form caves. 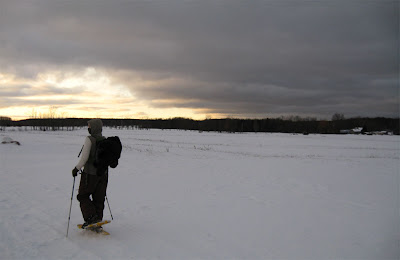 Photo by Andrea
After checking in at the Sunset Motel in Munising, we headed west on M-94, drove through Chatham, turned North at the Eben post office, then right onto Frey Road. We parked the car where the road curves left at the open field and headed to the first phase of our Ice Adventure. 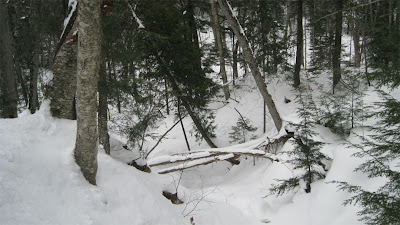 It felt much colder than it actually was. The temperature was somewhere in the low-mid 20's, but the light wind felt like an arctic assault to the face. Shortly after entering the woods, the effects of the wind tapered off and an interpretive sign welcomed us with information about the wilderness. 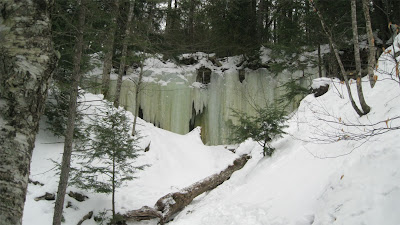 From there the trail is easy to follow; the path has a few steep spots, but doesn't really require much work for such an awesome pay-off. Shortly before the caves, a short bridge cuts across a stream, then the trail curves to the right and begins to climb. The ice becomes visible at the center of the “V” created by the hills on either side of the path. 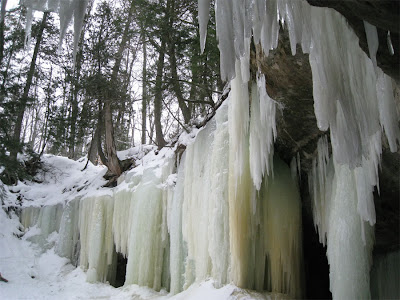 The Ice Cave
We had both seen a few photos of the ice caves, but none of them really captured the size of this phenomenon. It was difficult to decide where to begin to tackle it photographically, and we immediately began climbing around the hillsides to get a more expansive view, and crouching and crawling around at the base of the ice to see every possible angle. Unfortunately, my camera malfunctioned shortly after our arrival (I was able to fix the problem later), but luckily I could rely on Andrea to capture every square inch of the area and give me copies later. 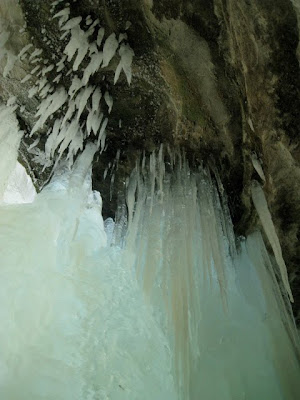 What we weren't able to capture, however, was the amazing sound inside the cave. The drips of water falling from above created wonderful echoes and added to the cave atmosphere. There is much variation of color and texture to the ice in different parts of the cave. Some formations were smooth and clear, others were bumpy and hollow-sounding, and there were some columns that looked like dripping candle wax. 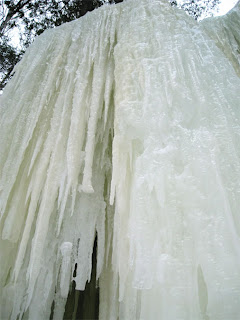 The ice was mostly white or had a yellowish tint from the sandstone. Light shining through from outside of the cave gave other areas a blue or green glow. The cave floor consisted of waxy-looking pools of frozen water in some areas, and exposed earth in others. 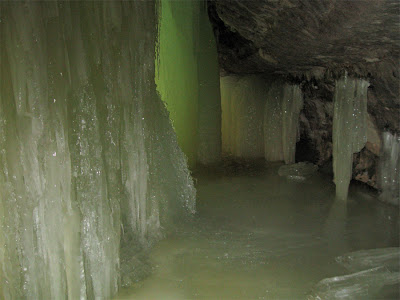 Inside the cave - Photo by Andrea
We spent at least an hour at the Eben Ice Caves, and could have lingered a lot longer had it not been for the cold catching up to us due to lack of activity. We had intended to hike to a nearby waterfall after leaving Rock River Canyon, but it was now close to sunset, so we tabled that for later in the trip and headed back to Munising to drink hot chocolate with peppermint schnapps and decide on the following day's hike. 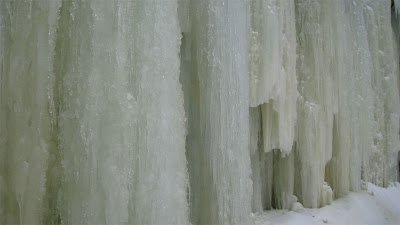 "I could happily die in this cave." - Andrea

More photos of the Eben Ice Caves can be seen here.
Posted by Nina at 9:29 AM

to reach a wider Michigan audience, you should post this series at >>>>

good advertising for the state

reach a wider audience for your photographic skills

and link to your excellent blog

damn, this is some fine stuff here ...

another Yooper oriented site to add to your Upper Peninsula blogroll

Michigan Waterfalls: A Guide to 199

Waterfalls of the Great lakes Region

I posted a link on my face book page for the Rock River Cafe' of your wonderful pictures after I located them in a Google search. Thanks for sharing!
http://www.facebook.com/patricia.dale.freeman#!/pages/Rock-River-Cafe/166148743406795

Heh. I just noticed that someone suggested you share with us at Absolute Michigan/Michigan in Pictures. Always gives me a warm feeling when people I don't know recommend me!!