Landscapes and Wildlife
4.20.15
This segment of the trip report is best presented simply as photographic documentation of the drive through the park on Badlands Loop Road and Sage Creek Rim Road, and the landscapes and wildlife observed.  Not much narration is needed as the pictures speak for themselves, but I will of course have to include a little geology. 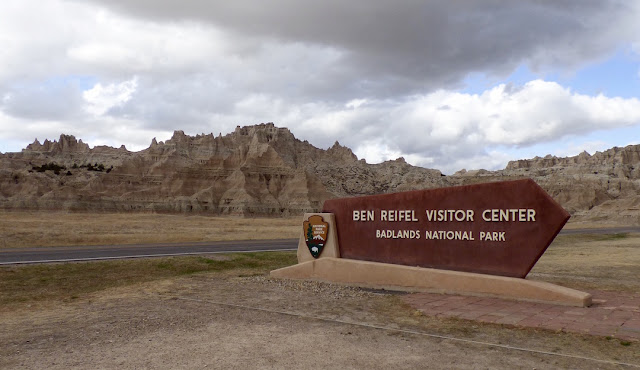 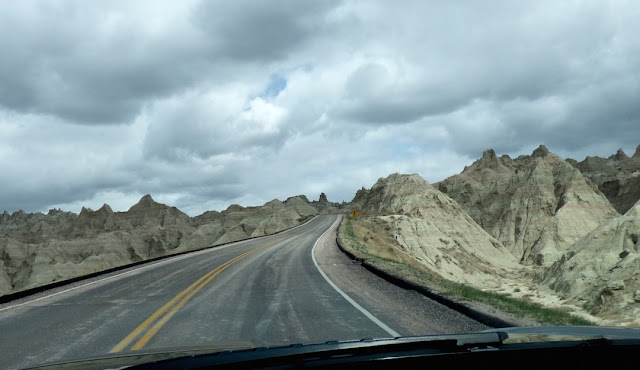 The park was still almost completely deserted.  Encountering another car was rare, and the many overlooks along the road were lonely and, ironically, being overlooked.


The red sedimentary layers (horizons) like these are fossil soils (paleosols) and are evidence of a warmer and wetter climate in the geologic past.

Approaching the Yellow Mounds area of the park, it looked like we were venturing into a desolate, post-apocalyptic land, where mutant warriors were lying in wait, ready to ambush us and steal our water and gasoline.

But there was no one. 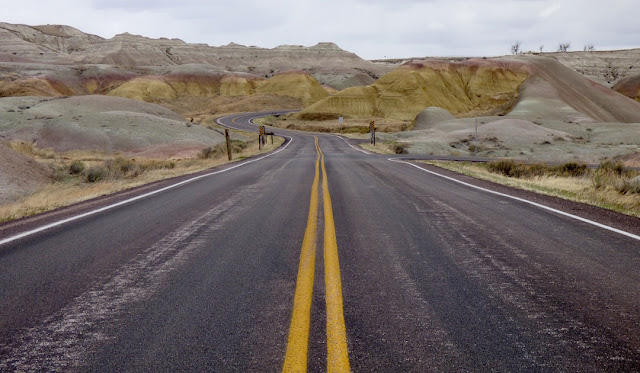 The yellow mounds are an odd feature in an already strange landscape.  Of these geologic formations, the National Park Service explains that when the ancient sea that covered this part of North America drained away as a result of the uplift of the mountains to the west (see the previous post), the top layers of the former sea floor became weathered over time into a yellow soil.  Creatively, they are now called Yellow Mounds.  (But I challenge anyone to name them something more appropriate.)  These mounds are another example of a paleosol.
https://www.nps.gov/badl/learn/nature/geologicformations.htm 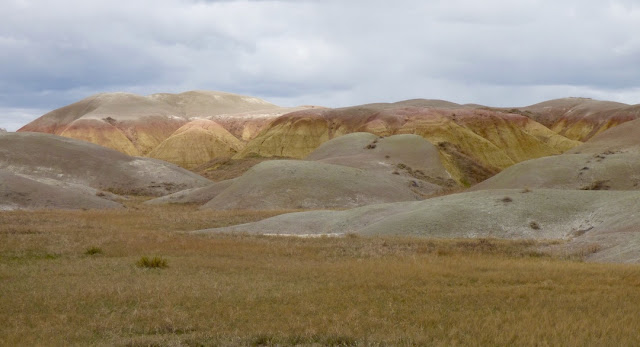 We passed a few female bighorn sheep as we meandered along.  They were unfazed by our presence as we slowed down to watch them graze near the side of the road. Unless it's mating season, rams and ewes do not intermingle; they live separately, congregating in groups of their own sex.

At the north entrance to the park, Badlands Loop Road ends and forks north to exit the park on highway 240, and west to continue through the park via Sage Creek Rim Road--a dirt road that skirts Badlands Wilderness Area, which is home to the park's nearly 1,300 bison. It is also home to a community of prairie dogs known as Roberts Prairie Dog Town.

Camping at Sage Creek is for the self-sufficient adventurer who prefers to camp far from the busier, more modern campground at Cedar Pass. (Both were completely empty during our visit.)  The Sage Creek Campground is free and somewhat primitive; there is no water, but there are pit toilets, and picnic tables with awnings for sun protection. These awnings are unusual sights for someone from east of the Mississippi, where there are no expansive grasslands or deserts with potentially dangerous sun exposure.


Camping at Sage Creek is also for those who don't mind living with the bison, who have the run of the place.  I had looked forward to experiencing this first-hand, but since the weather prevented us from camping, it was not to be.  My sister camped here during her trip a few years before and shared some photos of her experience:

This is a good time to exhibit the difference in the weather and landscape in just one month.  My photos were taken in mid-April, hers in mid-May.  While mine look cold, with dark, dramatic clouds and bleakness; hers are all warm light, green grass, and desert flowers.

May:
A few more examples:

I was so excited to see bison that I started taking photographs as soon as I spotted tiny brown dots miles away on the horizon.  I worried that I might not be lucky enough to see one up close, but there ended up being no need for that concern.  After driving for a few minutes, bison appeared everywhere.  They are huge and fascinating.  They look like enormous, old, grumpy wardens of the land, sporting unkempt beards with miscellaneous debris stuck in them.

We slowly drove along the road, stopping periodically to watch them wandering around and grazing.  I wanted to stay there forever.

After winding our way through the Sage Creek area, we turned around and headed back toward Cedar Pass, where we saw more bighorn sheep, this time perched high up on the formations. 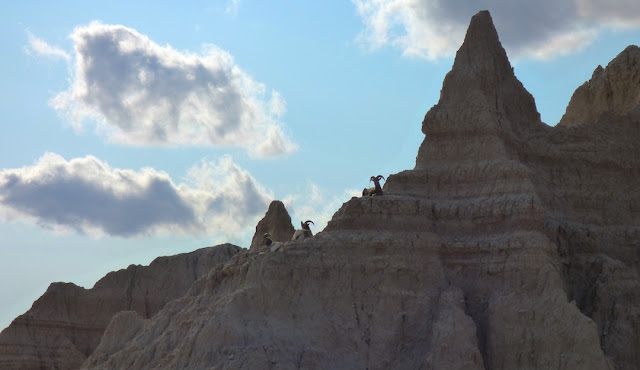 Back at our cabin, I spent time watching the smaller fauna in our immediate surroundings. A flock of yellow-headed blackbirds foraged in the dry grass in front of our cabin, and a few cottontail rabbits took shelter under our picnic table and in the taller grass behind the cabin.

The striking mountain bluebird we saw earlier at Door Trail was impressive, but my favorite was the western meadowlark. Considered an archetypal prairie bird, the western meadowlark is common in this part of the country--like seeing a robin in my neck of the woods--but to me it was an unfamiliar species with an exotic song that I ended up enjoying almost as much as the amazing landscape I drove for two days to see.

I sat outside for as long as I could stand the cold wind, watching one of these birds flit around in a tree behind our cabin, singing his little lungs out.

For a video of this guy singing, go here. 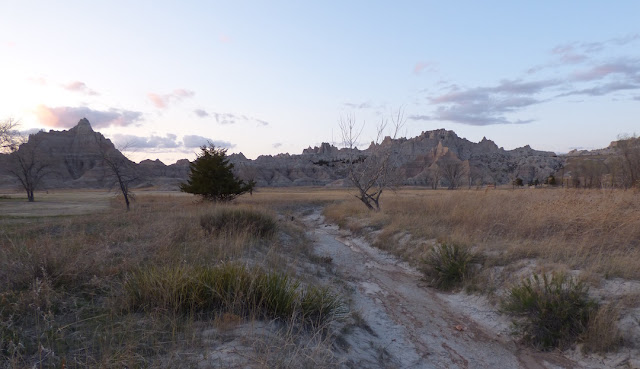 With no other visitors at Cedar Pass, the view behind our cabin was deserted and beautiful, and the only sounds were birds and wind. 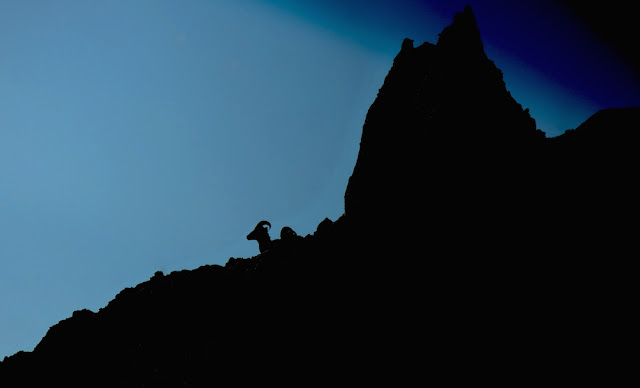 To be continued in Part Four: Castle Trail.
Posted by Nina at 12:15 PM