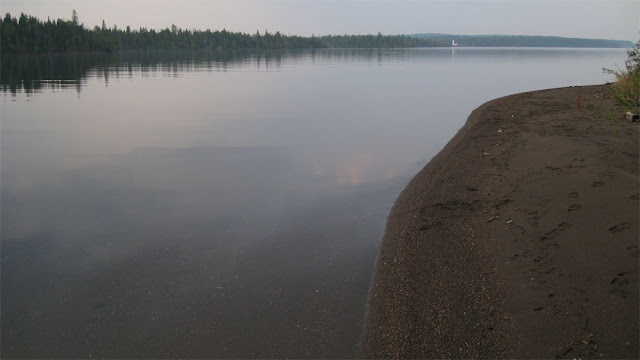 Rock Harbor Lighthouse in the distance across Rock Harbor

After the usual coffee, oatmeal, and spellbinding sunrise, we left Daisy Farm at 7:45 am. Although it hadn't stormed during the night, the overcast sky and wind told us that the weather hadn't officially decided what to do yet. 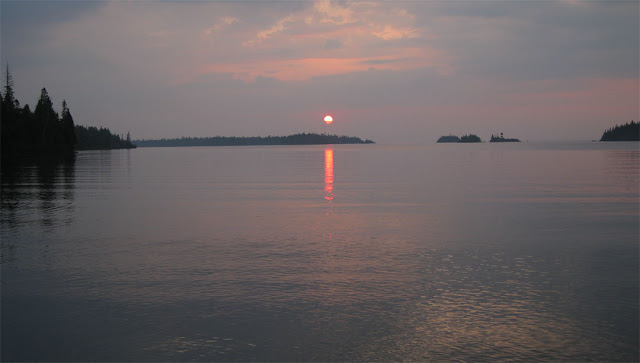 
Today, the 7th day of our trip, we would follow Rock Harbor Trail for a little over 7 miles with Rock Harbor as our final destination. From the reading we had done beforehand, we learned that Rock Harbor Trail consists of very rocky terrain and tends to become slippery in wet conditions. The path runs along the water's edge, and for the first few miles is relatively easy hiking. The sky slowly cleared over the course of the morning and it looked like our good weather luck would continue. 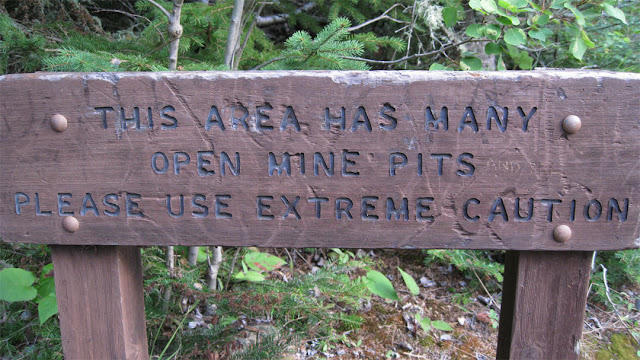 We passed the site of Siskowit Mine – a copper mine that had been in use during a brief period in the mid-1800s. Signs urge caution when venturing off-trail to explore the area. We stayed on the trail but were still able to see the remains of a few stone foundations where old buildings had once been. Across the harbor, we could see Mott Island which is the home of Isle Royale's National Park Service HQ. The island was named after Angelique and Charlie Mott – a couple who had been hired to come to Isle Royale one summer in the mid 1800s in order to guard a mining claim. The remoteness and the fact that there were very few provisions made Mrs. Mott nervous, but their employer 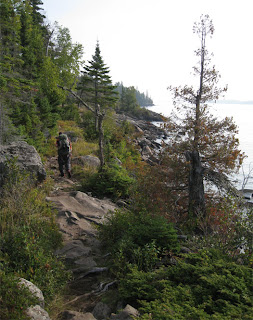 promised a boat of supplies would soon arrive, followed by another boat in the Fall, which would bring them home before winter. Neither boat showed up, and once their meagre food rations were gone, the Motts resorted to eating tree bark to survive.

Eventually, Charlie Mott went crazy from starvation and fever and, legend has it, attempted to kill and eat his wife. Luckily for Angelique, he was so weak by that point that she was able to thwart his cannibalistic plot and survive. Unluckily for Charlie, he died soon after, leaving his widow alone on the frozen island. She managed to survive by trapping the occasional rabbit using snares she made from her own hair until a ship arrived after the spring thaw. Here a section of shoreline that juts out from the main island across the harbor from Mott Island is aptly named Starvation Point.

About ½ mile west of Three Mile Campground, Rock Harbor Trail really starts to get interesting. We suddenly understood why this could be a difficult hike in wet conditions. Here the south slope of Isle Royale tumbles into Lake Superior, and a steady up and down pattern of climbing over rocky terrain makes for quite a spectacular hike. I was very happy we had saved this section of trail for our last full day of hiking as it gave us a fun (and tiring) end to the trip. Although we still had one day left and planned to do some day hiking around the Rock Harbor area, this was the last true hiking day. 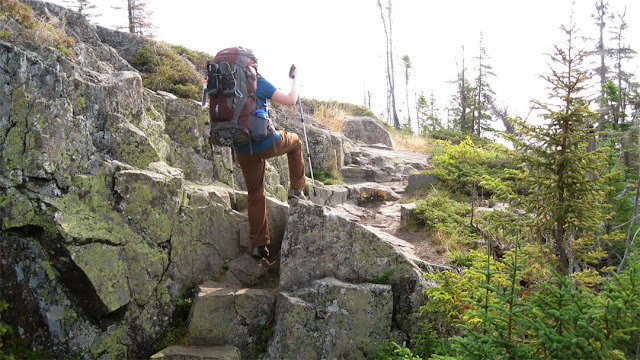 Expecting to see mountain goats peeking at us from the tops of rocky crests, we made our way along the shore, frequently using cairns to guide us over the ambiguous landscape. We spoke with a hiker coming from the other direction who had recently seen a female moose visiting the water for a drink. We had yet to see a moose up close, so we kept our eyes and ears peeled but had no luck. I really hoped I would get to see another one before leaving the following afternoon. It isn't uncommon to spot moose in the Rock Harbor area, so I still held out hope. We eventually came full circle and arrived back at the Rock Harbor Visitor Center at 11:30 am. Our first order of business was to visit the camp store for snacks. I highly recommend the dill pickle potato chips; they are popular for good reason! That done, we needed to decide where to stay. The Rock Harbor campground offers shelters and tent sites, but we decided to be spontaneous and see if there was a room available at the lodge. We justified splurging at the end of the trip in the spirit of seeing what the whole Rock Harbor experience was all about. 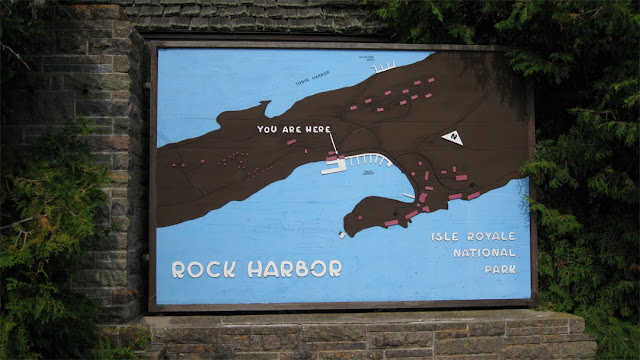 Being that it was near the end of the Isle Royale season, both the lodge and camp store were scheduled to close down the following day, so we were just in time. A room was available and after confirming that the restaurants were still serving a full menu (they stop stocking supplies after a certain point), we decided to go for it. Luckily we had read about the Rock Harbor Lodge prior to our trip; therefore, we knew not to expect anything extravagant (despite the price tag). Anyone planning to stay there must accept that he/she is paying for the miracle of the existence of a lodging establishment in the middle of nowhere, not for luxury of any kind. The beds are clearly left over from a time in history where the human being was a much smaller creature. I'm 5'5" tall and my feet were in danger of hanging off the end. Still, a hot shower and real pillows after seven days was a treat. We visited the cheaper of the two restaurants, the Greenstone Grille, for lunch (I have never eaten so fast in my entire life), and returned to our room where we instantly fell asleep for an hour or two. 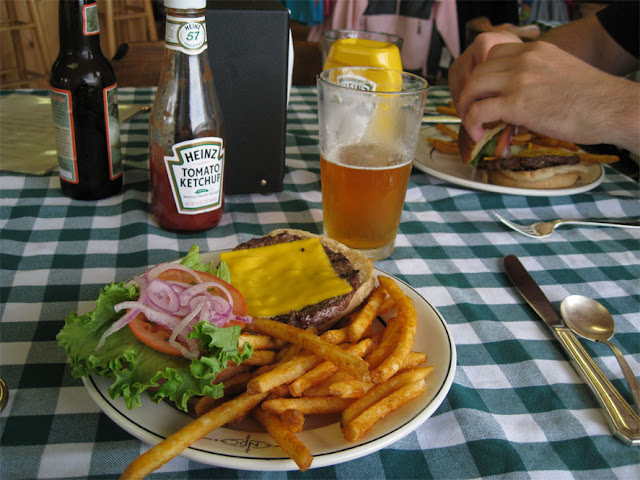 Ate this in approximately 9 seconds

Once we woke from our involuntary naps, we ventured out to the visitor center to turn in our itinerary and fill out a form describing our wolf sighting. There is a very thick guest book that visitors can sign, and we saw an entry from a couple who had been coming to Isle Royale every year for 47 years. We received a complimentary ½ day canoe rental with our room at the lodge, but we were both too tired to use it right then. We spent the rest of the afternoon wandering around the immediate area before deciding what to do for dinner. The Rock Harbor Dining Room was a bit too expensive for our mood, so we opted for the Greenstone Grille again. While waiting for our frozen pizza and enjoying one of our favorite Michigan beers, Bell's Two Hearted Ale, we entertained ourselves by watching all the hikers coming and going through the restaurant/giftshop. Every single one of them was limping in the exact same way (including ourselves), and we knew exactly how each of them felt. 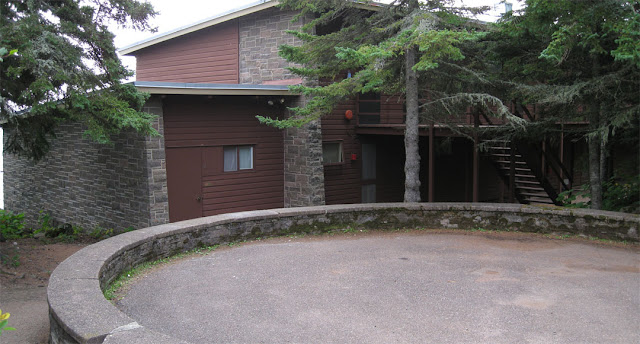 One of the buildings at Rock Harbor Lodge

We returned to our room overlooking Lake Superior and were treated to the first real view of the amazing quantity of stars overhead that we'd had all during the trip. I fell asleep listening to waves washing up on the rocky shore below our window. Although I was sad that the trip was coming to an end, I looked forward to a relaxing day of exploring our surroundings without the need to push on to another destination.

More photos from this trip can be seen here.
Posted by Nina at 7:21 PM

Thanks for the update, I am looking forward to the next installment.