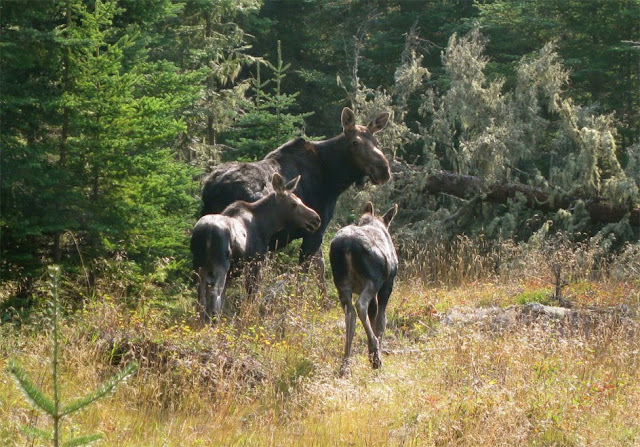 A female moose with 2 young notices me

Visitors on Isle Royale can't simply wander into the Rock Harbor Dining Room willy nilly with unscheduled hunger. This is how civilized society breaks down. Meals are served during specific time intervals; therefore, it was necessary on day 8 to wake up early to meet the 7am-9am breakfast schedule. We are big fans of breakfast, and being early risers, this was not too difficult to accomplish. Still, I felt bad for those who woke at a more reasonable hour with dreams of eggs and hash browns still fresh in their minds, only to find they had missed this narrow opportunity. 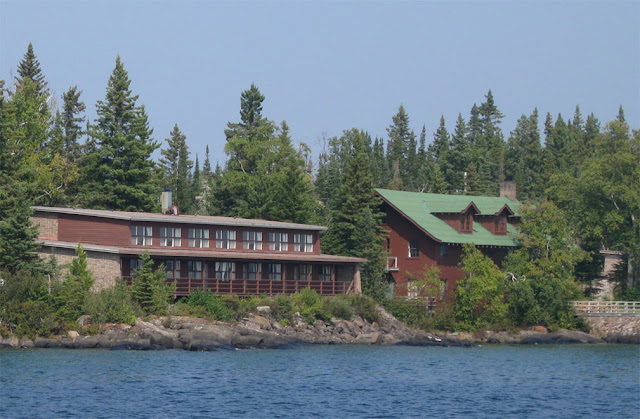 Rock Harbor Lodge and Guest House viewed from the water
Still dark outside, we arrived promptly at 6:55 am and loitered outside the restaurant entrance like a couple of 15-year-olds waiting for Twilight tickets. It was very quiet and we appeared to be the only people awake in Rock Harbor, aside from those we could hear inside preparing to open.

While enjoying a breakfast of coffee and pancakes (no real maple syrup despite the fact that Isle Royale is technically in the U.P. and almost in Canada), we discussed how to spend our last day on the island. The 2:45 pm ferry was several hours away, giving us plenty of time to explore trails, coves, and small islands in the Rock Harbor area. We felt good, but pathetic as this sounds, we still felt like Annie Wilkes had taken a sledge hammer to our ankles. There were a handful of day hikes I would have loved to have taken, and paddling around all of the inlets sounded great, but we were both content just relaxing for a while. We put the ½ day canoe voucher on hold and decided to spend the morning hanging around the visitor center and dock. 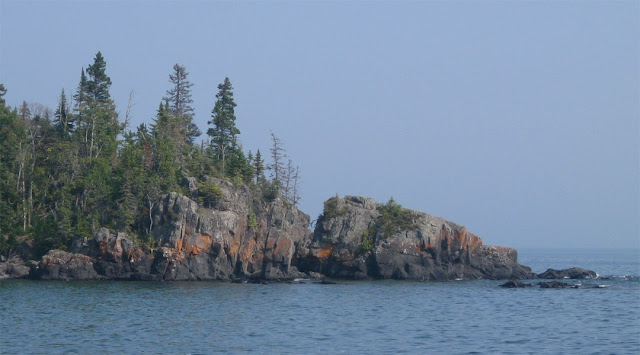 Rock Harbor could prove an enjoyable place to spend 2 or 3 days if backpacking isn't appealing. A handful of very interesting day hikes start there and range anywhere from a few miles to 10 miles roundtrip. Rock Harbor Lodge also operates a boat service that allows visitors to see a few other parts of the island without having to hike long distances. Smaller islands can be explored up close via canoe or kayak. I could easily see myself going back and spending more time there.

By 10:30 I was feeling a bit restless and decided to go for a walk. There were murmurings of a cow moose in the area, so I decided to take a walk along Tobin Harbor Trail to see if I could find one. Craig was still in energy saver mode, so he elected to stay behind and keep an eye on the supply of dill pickle potato chips in the camp store. I struck out on the trail and headed toward the sea plane dock. A few hikers were waiting there for a flight off the island, including the woman we had met solo hiking the Greenstone. Within a few minutes, the sound of a small plane could be heard. It appeared over the trees and I watched it land in Tobin Harbor. While the group got ready to board, I got back on the trail and resumed my search. 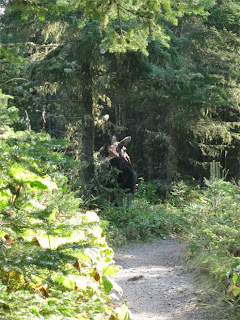 I joined up with a few other hikers who were also killing time before the afternoon ferry. Within just a few minutes, we spotted a big female moose in the trees just off the trail. She seemed ok with our presence, provided we didn't get too close. After about 5 minutes of hushed excitement and jockeying for position to take photos, everyone else left. I decided to stay and keep watch from a distance. There was a clearing ahead on the other side of the trail, and I had a feeling she was heading that way. If I stayed far enough away and didn't bother her, maybe I would be able to get a good clear view for a photo.

My plan paid off as she emerged from the trees with two previously hidden calves the size of ponies. The three of them slowly lumbered across the trail and into the clearing. Eventually, I followed and stood on the trail watching them as they walked toward the woods on the far side of the clearing to browse the foliage. At that moment, Craig appeared with a couple of hikers he had met at the dock. We all watched the moose family for a few minutes, before they disappeared into the woods. Later we would hear a theory that this particular female is staying close to the Rock Harbor area, the idea being that it is easier to protect her calves in an area where wolves are hesitant to enter due to human activity. She has her work cut out for her for the upcoming winter. 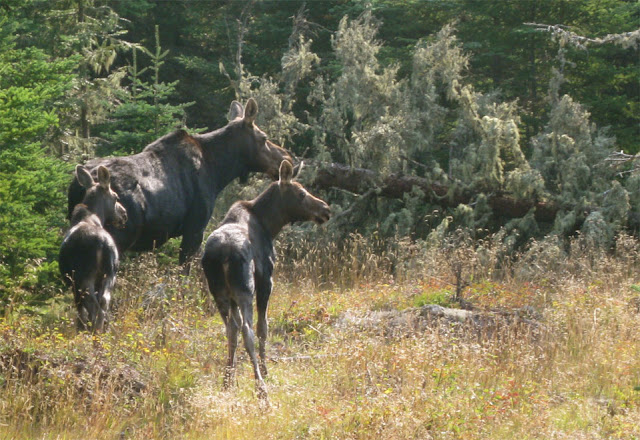 Something grabs the attention of this moose family

We returned to the dock and learned that the hikers Craig had met belonged to a Northeast Ohio Backpacking Club. One of them had taken a couple of outstanding photos of a huge bull moose a few days before. He was ahead of his group and came around a corner to find the enormous animal staring at him. Although I was green with envy, I probably would have had a seizure from excitement at the sight of those antlers.

We spent the last few hours browsing the books in the visitor center and talking with our new acquaintances while waiting for the ferry. About an hour before boarding, I made the decision to take some motion sickness pills. I didn't think I'd have trouble with sea sickness, but this proved untrue on the initial ferry ride to the island the week before. Despite calm waters, about halfway there I started to feel queasy from the constant gentle rocking of the ship. I frequently had to step outside onto the deck in the cold fresh air to avoid getting sick. 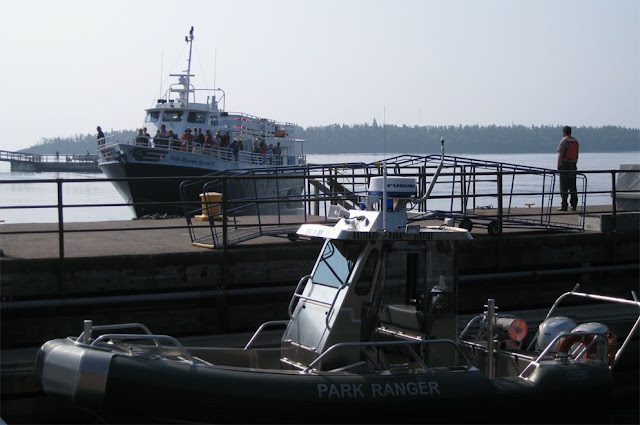 A park ranger waits to greet a new batch of visitors

The Isle Royale Queen is awesome, and I highly recommend taking it to the island.  However, amongst un-seaworthy hikers, it is known as “The Barf Barge.” It is a relatively small vessel, and  when the water is anything but glassy smooth, chain-reaction vomiting has been known to occur. We had read grim accounts of passengers lining the deck shoulder to shoulder, gripping the handrails and leaning over the side for the entire journey. The problem with taking medicine for motion sickness it that it causes me to fall into a zombie-like state – too out-of-it to read, think clearly, or have a coherent conversation, but not out of it enough to fall asleep. This makes for a miserable time. But, I really didn't want to take the risk of being the one to start the dominoes falling. 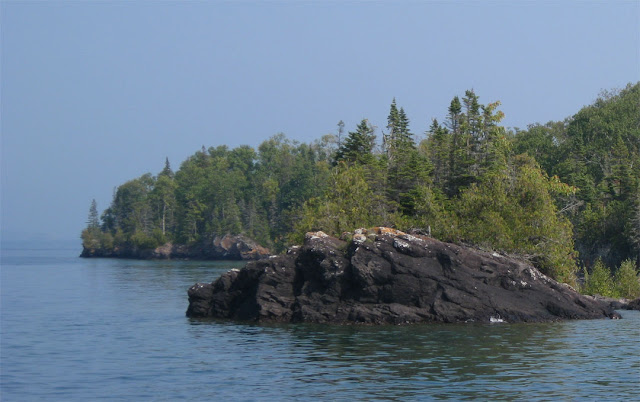 The boat was full, and for the first hour, I was very high from the motion sickness pills. This was a good thing as a very chatty woman sat with us once she and her husband discovered they couldn't find seats together. The husband stood there dumbly for a moment, before his wife harshly shooed him away to go sit outside off the back of the boat. Without any exaggeration, this woman talked non-stop for two solid hours. I don't think she breathed. We learned lots of interesting “facts” which she had absorbed during her time staying at the lodge and taking boat tours. She explained to us that both male and female moose have antlers (I tried to object to this, but she wouldn't have it), and that she had met a family of hikers, which included a grandfather in his 70's and a 12-year-old child, who had just hiked the entire 42+ miles across the island - in a single day. I looked down at her foot and saw a bloody wad of toilet paper stuck under the strap of her sandal. “Alright,” I interrupted suddenly. “What's the deal with your foot?” Emboldened by the power of the motion sickness pills, I felt that if I was to be held prisoner by this woman's never ceasing aural assault, I should be able to ask whatever the hell I wanted. 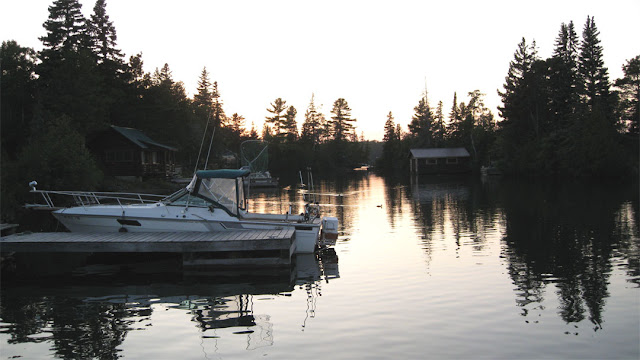 It turns out a leach had affixed itself to her foot while canoeing earlier that day, and upon showing it to her husband, he simply reached over and ripped it off. I explained to her that I had taken some medication to prevent becoming violently ill and to please forgive me if I wasn't very lively company. She really was very friendly, but one can only take so much. 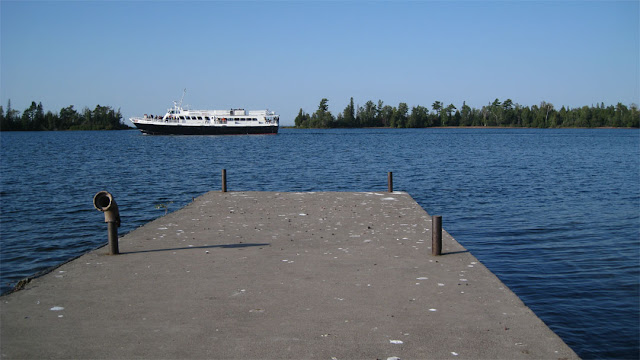 It took almost 4 hours to reach Copper Harbor and I was barely conscious for the last two of them. We retrieved our car from the ferry parking lot, and I was impressed by the distance people had traveled to visit Isle Royale. States all over the country were represented by the license plates I observed: New York, Washington, Iowa, Texas, Colorado, Wisconsin, and Indiana to name a few. Since there is no reliable cell phone service in Copper Harbor, we checked in with our families by way of the pay phone outside the King Copper Motel. After eating whitefish chowder and warm panini sandwiches at The Mariner, and drinking a couple of Keweenaw Amber Ales at Zik's, we headed back to the motel and went to sleep in preparation for our 12-hour drive home. 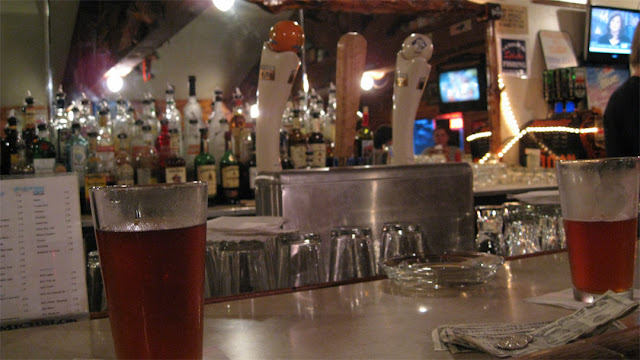 A small but perfectly excellent selection of draft beers at Zik's

This hiking trip to Isle Royale National Park is the best vacation I have ever taken. It was at once beautiful and subtle, physically exhausting and mentally rewarding. A feeling of contentment settled over us while on Isle Royale and it lasted for several weeks after returning home. Despite how much I may have enjoyed other vacations, no other trip has managed to have that effect. Once home, I spent countless hours sorting through our photos, reading trip reports from other hikers and viewing their pictures as well. Isle Royale left an impression on us that will not fade any time soon. We want to go back someday, and hope that the delicate balance of life in this remote wilderness will find a way to thrive into the uncertain future.

More photos from my trip can be seen here, or by clicking on the Isle Royale link to the upper right under photos.

Brimmages
Posted by Nina at 9:45 PM

Thanks for supplying such a fine and detailed trip report. I really enjoyed it.

I loved the woman on the Queen. I sat with her male counterpart two years ago. He talked non-stop, preventing me and my hiking partner from napping on the trip.

Just wanted to say that I've thoroughly enjoyed reading your posts -- some day I'll get to Isle Royale, but until then I'll live vicariously through you!

a thoroughly captivating journey !! thanks for taking us along on the trip !! just wonderful !! we felt like we were right there !! splendid use of the blogging medium !!

Very nicely written account. I'm planning a trip late summer 2011 and stumbled upon your blog post. Thanks for the valuable information, and the lovely writing.

Wow...a fascinating documentation of your trip...thanks for putting in the time to share!! My husband & I back-packed the Porkies for a weeek last July & we have pondered the idea of returning there and tacking on a few days @ Isle Royale. After reading your experiences; I'm sold and ready to go. I'm disappointed we can't take our dog though....it was such a blast having her in the Porkies with us...she was a true trailblazer!

I've been to IR a couple times in my life, the last of which was in 2002. I enjoyed your report thoroughly, especially with your literary style of writing. Very interesting, very entertaining and very insightful. Great pics, too! Wow... what a trip you had! Thanks for sharing!