Daisy Farm to Moskey Basin
“I did nothing, and it was everything I ever thought it could be.” -Office Space
Although we only had to hike about 4 miles to get to our destination, we decided to get an early start in the hope of securing a good spot at Moskey Basin. There was no hint of sunlight when we awoke around 6:30 am and attempted to quietly deflate and roll up our sleeping pads. 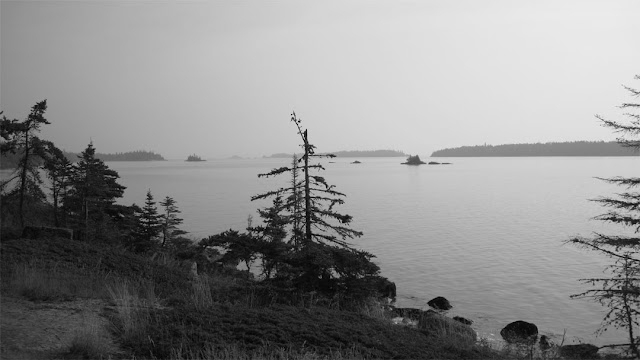 Throughout the trip, we tended to wake before anyone else and set out on our day's hike just as others were emerging from their sleeping bags. I love getting up early when camping to enjoy the sunrise if I'm in a position to do so. Plus, I think there is a better chance of spotting wildlife in the early morning, a philosophy that Craig eventually embraced and would pay off big time later in the trip.


After getting dressed and eating breakfast by headlamp, I wandered down to the water to witness a magnificent sunrise. A handful of others were now awake, standing at the water's edge and staring in awe at the purple and pink horizon. 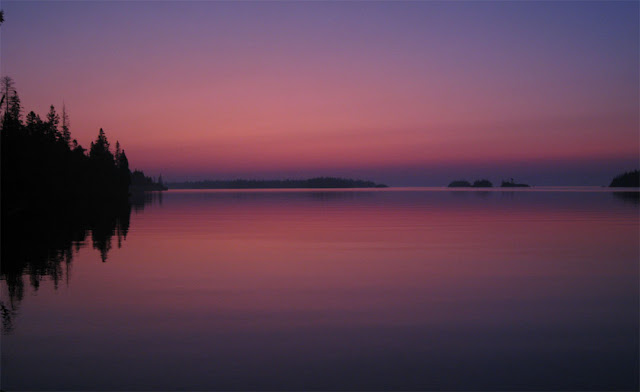 When I returned to the shelter, Craig was visiting the two women camping next door. We had filtered much more water than we needed the night before, and we didn't want to carry the excess since we had plenty to drink and would be able to get more at our next site. After debating whether he would seem like some kind of weird forest creep by offering to give away our extra water, he had apparently decided to go for it. Since they weren't chasing him out of their campsite with torches, it appeared to have gone well. 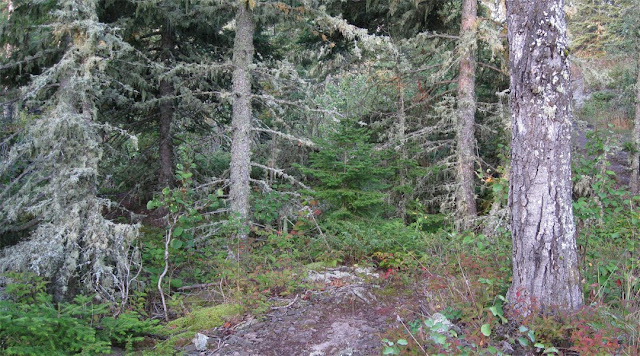 We finished packing and headed west on the Rock Harbor Trail just after sunrise. This section of trail proved very interesting and would be my favorite hike of the trip. Admittedly, I felt relieved that we only had this 4-mile stretch to accomplish that day. If we had pushed all the way the day before and been made to endure this stretch of trail at the end of the planned 10.8-mile trek from Lane Cove to Moskey Basin, I might have set fire to the trail, then salted the earth.

Here's how Jim DuFresne describes this route in his essential guidebook, Isle Royale National Park: Foot Trails & Water Routes: “...the trail begins its up-and-down course over one rocky crest after another. A few times it dips down into wooded terrain, only to break out and ascend another bare, rocky crest. Keep sharp eyes out for rock cairns because the trail is easy to lose. There are a few steep climbs and descents but none of them are long.” This is basically right on point, although I don't remember losing the trail more than once or twice, and only for a few seconds each time. 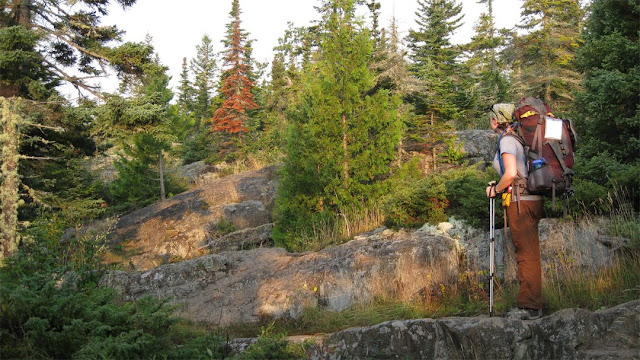 The constant up/down that DuFresne describes was exactly that – constant. But the landscape was so fascinating I couldn't help but love the entire journey. I took breaks here and there to catch my breath and, in between the gasping and panting, exclaimed about the utter awesomeness of our surroundings. The trees here were very scraggly and covered in old man's beard, giving everything a very old and weathered look. The rocky terrain revealed Isle Royale for what it actually is – a huge, ancient rock that has somehow managed to grow a forest on it. 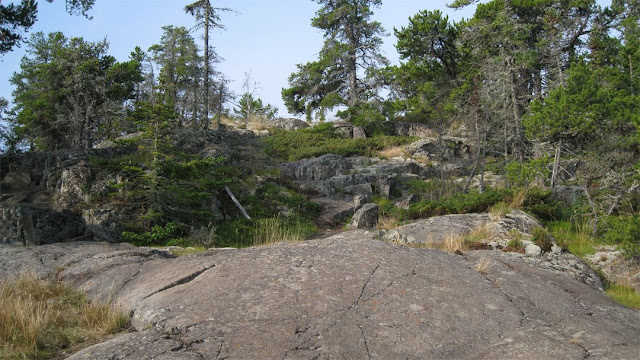 The terrain of Rock Harbor Trail

As we ascended a ridge topped with a clearing, we heard something that stopped us dead in our tracks. A low moan somewhere in the distance rose in pitch and then became quiet. We stopped and waited, staring at each other with wide eyes. Again we heard it - a low-pitched, mournful moaning which was soon joined by a few more, all at different tones. It wasn't really how I imagined the sound, but it could be nothing else: We were listening to wolves howl for the very first time. Soon, a chorus of howling washed over us, and we stood there rooted to the spot, smiling at each other crazily. It was the most exciting sound I've ever heard. 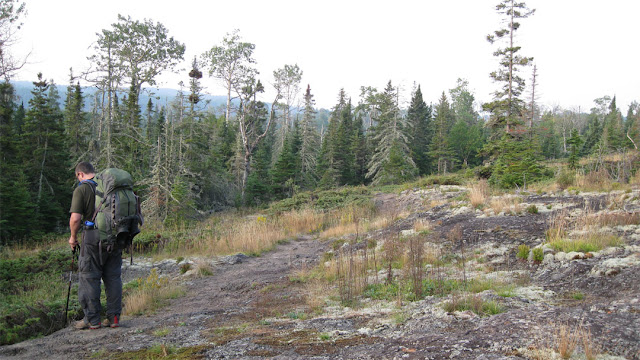 At the top of yet another ridge

Abruptly, the howling stopped. We shook ourselves out of the stupor the sound had caused and descended the slope, paying extra attention to everything around us. Not long after listening to the wolf pack at the top of the ridge, we began to notice wolf scat along the trail. It looks similar to that of a big dog, but with hair in it from whatever animal had been a recent meal. While moose are the gray wolf's main food source on Isle Royale, they turn to beaver during the summer. The park brochure gives insight into the cycle of life on the island, describing the interdependency between the moose, wolf, beaver, red fox and snowshoe hare, and how each of them is needed to maintain symbiosis in this unique ecosystem. 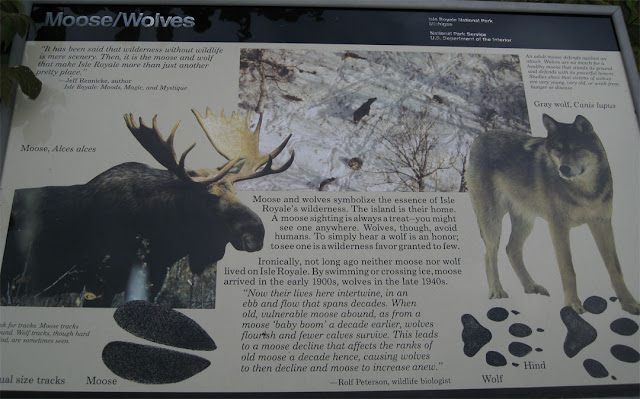 "To simply hear a wolf is an honor; to see one is a wilderness favor granted to few."

About an hour before reaching Moskey Basin, we crossed paths with the couple from Wisconsin whom we had met the day before. Unlike us, they had made it all the way to Moskey Basin and were now making their way back toward Rock Harbor before heading home. When I mentioned how amazing the trail was, the husband looked at me like I was sprouting velvety antlers and said, “You like this trail? I hate it!” We asked them if they heard the wolves, and he 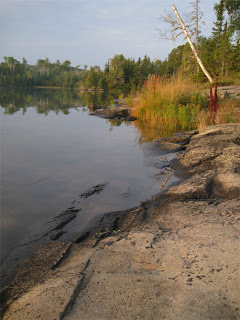 got very excited. “We saw one,” he blurted. They explained that about ½ hour back, they had seen one standing in the trees at the edge of the trail near a stream crossing. They suggested we keep our eyes peeled when we get to this area because it might still be there.

Now on tenterhooks and more aware than ever of our surroundings, we made our way quietly along the trail. Every sound had us stopping, listening, and squinting into the trees. Eventually we decided that if the wolf didn't want us to see it, we wouldn't. And we didn't.

We arrived at Moskey Basin around 10:30 am, late enough that everyone had cleared out except for one tent camper who was still sleeping, and early enough that no one else had arrived yet. Not only were we able to claim a shelter, but we also scored the best site possible. Smooth, solid rock rises out of this inlet of Lake Superior and slopes gently upward, eventually flattening out. The shelters are placed right at the tops of these wonderful rocky slopes and are very close to the water. Our shelter appeared to have the best rock surface in front which eased gradually into the lake – perfect for swimming and collecting as much water as we would need for cooking, drinking, and doing some pseudo laundry. 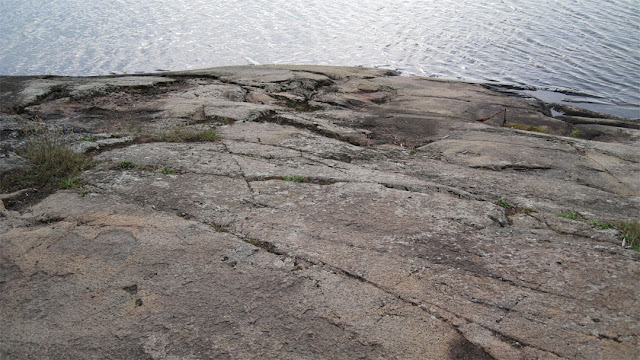 Our front yard at Moskey Basin

This was instantly our favorite spot so far and we knew it would be impossible to top. I can say confidently that it is the best spot in which I've ever camped. The scenery was so beautiful that I won't even bother to describe it because I don't think it's possible. We were very glad that we had wimped out the day before and changed our plans. This was going to be an excellent spot to spend a whole day doing absolutely nothing. A park ranger passed through briefly to check on things and asked how we were doing. Loons called to one another, and two very young ones practiced diving for fish, 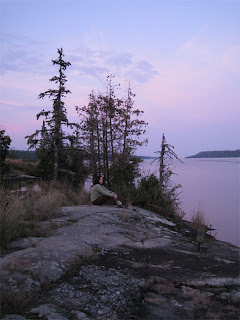 popping back up here and there in front of our site. Other unidentified birds sunned themselves on rocks, and after getting in the water ourselves, we did the same.

Feeling refreshed, we strung a line in front of our shelter and hung our clothes to dry. As we prepared lunch at our picnic table, a lone hiker showed up at the next shelter and told us his story. He was from Traverse City and had made arrangements to meet up with a friend on the island the day before. After hiking as fast as possible to get from Rock Harbor to Mt. Ojibway (their meeting place) by a predetermined time, his friend had already come and gone. Since there is nowhere to camp at Mt. Ojibway, this meant that our new acquaintance had to turn around and hike back to the first place he could find – Daisy Farm. A group of hikers found him, slightly hallucinating and dehydrated, and invited him into their shelter. After receiving water and food, the poor guy passed out and awoke the next morning, embarrassed to find a ranger checking on him. Now he was at Moskey Basin because he thought his hiking partner might show up there. If not, he was going to hitch a ride with some boaters who were heading to Three Mile and had offered to take him along. 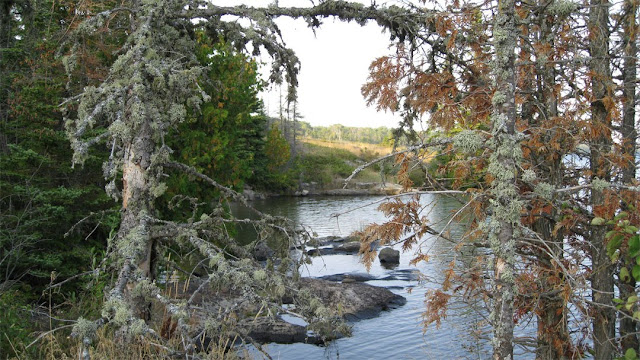 After lazily resting in our shelter for an undetermined length of time, we made dinner and watched 3 otters splash around in the water in front of our site. By now, Mr. Traverse City's friend had shown up and they had gone, and a big group of hikers from a Minnesota backpacking club had taken up residence next door. 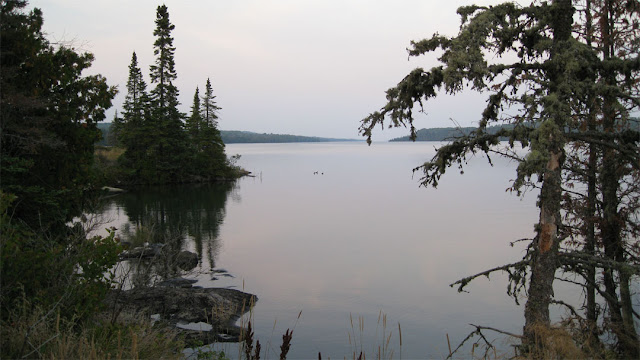 Moskey Basin, the view east from our site

We looked forward to lying on our sleeping pads that night out on the rock, hopefully watching more bats, and stargazing. If some wolves decided to join us and howl at the moon, which was going to rise directly in front of us, that would also be acceptable. Unfortunately, cloud cover obscured the moon, and mosquitoes became a bit bothersome at dusk which ruined the atmosphere somewhat. A few toads hopped around the rock, and one of them stood at the water's edge repeatedly nabbing insects with its tongue. We lingered outside as long as possible, not wanting to give up this amazing place to go to sleep. Eventually we had to turn in, but I tried to stay awake as long as possible like a little kid, hoping to hear the wolves again. Owls hooted and loons called, and eventually I drifted off. This was the best day so far, but our trip would get even better. 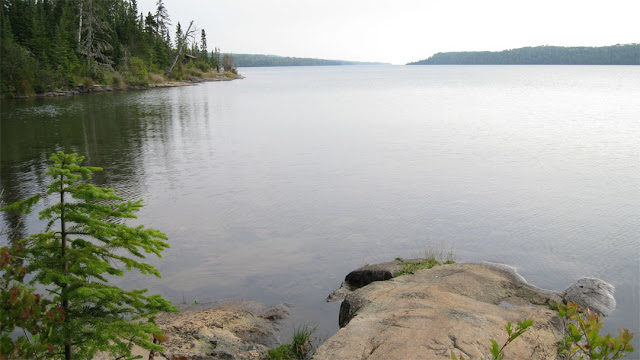 At the end of Moskey Basin, looking back toward our site

To be continued in:
Isle Royale Day Four: Moskey Basin to West Chickenbone LakeMore photos from this trip can be seen here.
Posted by Nina at 5:55 PM