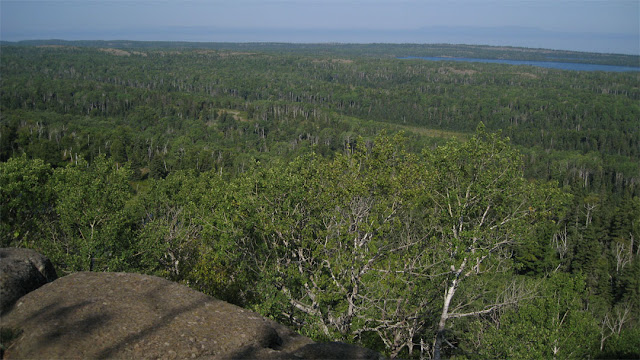 The view north from Mt. Franklin

After leaving the picturesque setting of our campsite at Lane Cove, it was necessary to back track up Lane Cove Trail to the top of the Greenstone Ridge. We had been dreading this moment since reading about the steepness in other hikers' trip reports while in the research and planning phase of this trip. In truth, it didn't take as long as I expected (I bet 2 hours minimum; Craig firmly wagered 1.5 hours which proved right on the money) and once we had a few minutes to recuperate at the top, we agreed that going down was worse than going up. 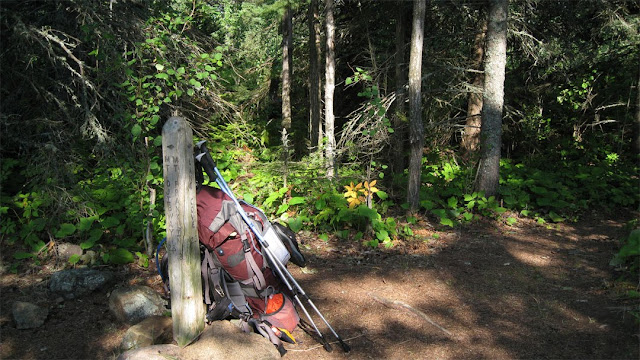 While resting at the trail junction, we met a few other hikers who had also camped at Lane Cove and were getting an early start. Two young guys had climbed out ahead of us and were headed to Chippewa Harbor – a distance of 16.6 miles. We helpfully informed them of their insanity before bidding farewell. A couple from Wisconsin arrived next and, like us, were heading to Moskey Basin. Looking to be around 50 years old and in very good shape, they were like versions of ourselves 15 years from now, only much better. Over the coming few days they would shame us as we would see them here and there, taunting us with their cursed drive and fitness. 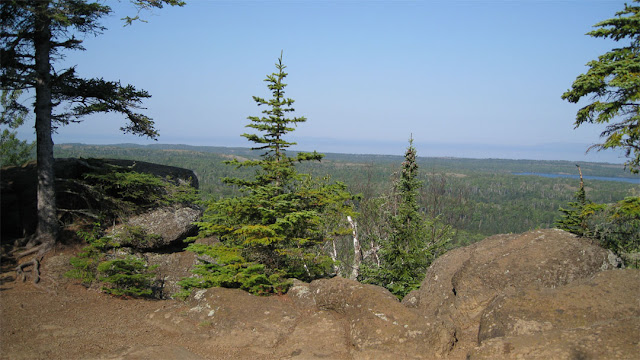 Mt. Franklin
After a half-hour of wallowing at the trail junction, we headed west along the Greenstone Ridge toward Mt. Franklin, less than ½ mile away. Mt. Franklin is a spectacular lookout point at an elevation of 1,080 feet – this is where we should have taken our break. This vantage point offers a view far above the trees of the north side of the island, an inland lake or two, Lake Superior, and the distant shadow of Canadian shoreline. Huge chunks of rock rise out of the ridge here providing ideal spots for resting, eating lunch, or just absorbing the marvelous view. I was sad that we had lingered so long at the top of Lane Cove Trail and couldn't spend too much time here. 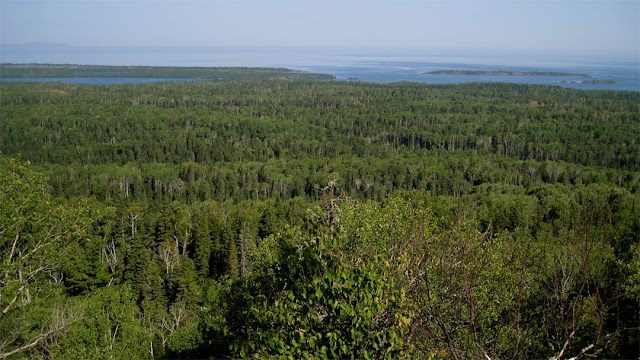 The view north from Mt. Franklin
The section of the Greenstone Ridge between Mt. Franklin and Mt. Ojibway – our next stop and lunch destination 2.5 miles away – is reportedly one of the most scenic stretches of this long, 42-mile trail. We agreed that it was noteworthy in that the ridge is high enough to provide panoramas of both the north and south shores of the island, and Canada on a clear day. In fall it would undoubtedly prove an impressive stretch of trail; however, it was very hot on the high, sun-exposed ridge and we looked forward to reaching Mt. Ojibway and the shade of the old fire observation tower that still stands at its summit. This section proved to be a very long and tiring stretch that seemed to go on forever. 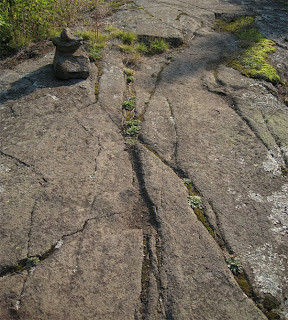 A cairn marks the way on the Greenstone Ridge
By the time we reached Mt. Ojibway, we were exhausted and a bit annoyed with the Greenstone Ridge. We puzzled over why it is such a popular hike for people to take along the entire east to west length of Isle Royale. Luckily, we would discover later in the week that not all of it is quite so bare and exposed to the sun, but still very challenging nonetheless. 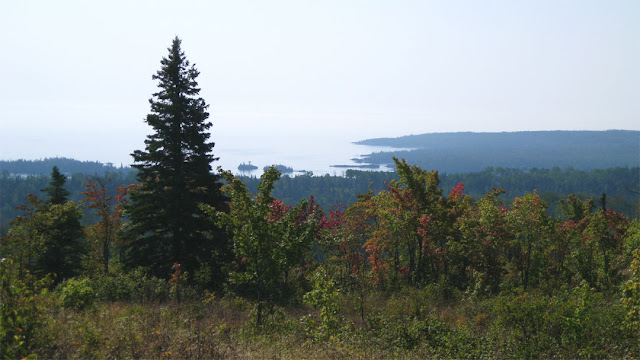 The view south from the Greenstone Ridge
We fired up the Jetboil in the shade of the fire tower and prepared to indulge in a lunch consisting of dehydrated burrito mix in whole wheat tortillas and powdered orange gatorade. Soon, other hikers showed up to share the ideal lunch and resting spot, including the sisters we had met at Lane Cove (one of them was again not speaking to anyone) and a group of young hikers from St. Joseph, MI. They had come from Moskey Basin and highly recommended we push to get there that night. We had started to doubt our ability to complete our planned 10.8 mile hike to this destination based on how we felt 5 miles into it. One of the girls in the group informed us that wolves had been active near their campsite, and they had enjoyed the movie-like experience of listening to them howl the night before under a full moon – at 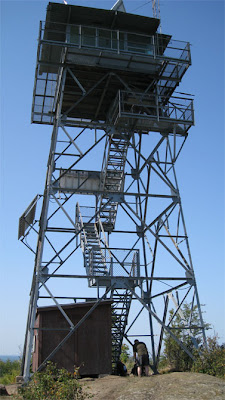 midnight. A few of their party had also seen a moose in the area. This information boosted my determination to make it all the way.

Before leaving Mt. Ojibway, I climbed up the fire tower to observe the view it provides. Although it is closed about 3/4 of the way up, people can still climb high enough for a nice 360º view of the island. It was a bit hazy, but on a clear day it is undoubtedly wonderful to see. No longer used to watch for fires in this remote wilderness, I think the tower now holds equipment used to monitor air pollution.

I was feeling refreshed and looking forward to the rest of our day's journey which, according to the map, looked mostly downhill. This was not the case. We descended the Greenstone Ridge down Mt. Ojibway Trail toward Daisy Farm campground where we would pick up the Rock Harbor Trail and head west to Moskey Basin. Although technically descending, Isle Royale is made up of so many ridges that the hiking is an almost constant up/down sequence. Every time we descended a steep ridge and found ourselves in a cool valley, there was another ridge to climb in front of us. Within 30 minutes of leaving the sanctuary of Mt. Ojibway, I had deteriorated into a pathetic, sweaty disaster. Craig was getting further and further ahead and suddenly I didn't feel so good. I was not going to speak of what happened next, but in the interest of honest trip reporting, here it is: Suddenly I was dizzy and decided I needed a break with my pack off. As soon as my pack hit the ground, I found myself on all fours vomiting in a very non-Leave No Trace fashion off the side of the trail. Goodbye burrito and gatorade; we had some good times. I felt like the biggest wuss on the planet, but once that was accomplished, I suddenly felt great again! 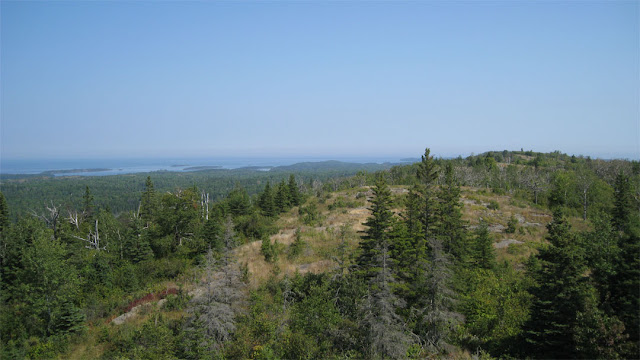 East view from the Mt. Ojibway fire tower
Craig had stopped to wait for me at the top of a steep ridge, and was feeling quite exhausted himself. He voted for stopping at Daisy Farm for the night, but I still wanted to get to Moskey Basin. “You just threw up,” he pointed out in defense of his desire for change of plans. “But wolves are near Moskey Basin,” I countered. By this point I think I had gone temporarily insane and was attributing my moment of weakness to too much sun beating on my head on the Greenstone Ridge, drinking 70 oz of water in 3 hours, too much food at Mt. Ojibway, and my as-yet-unfulfilled desire to see wildlife. 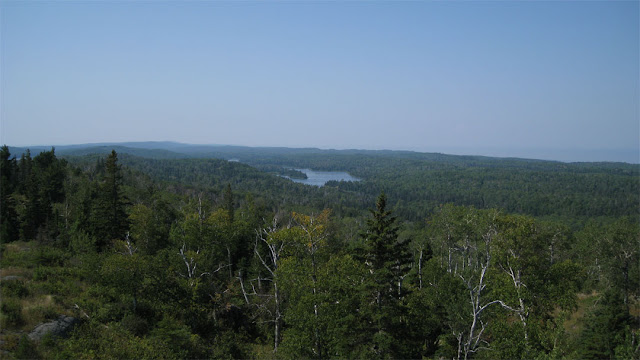 West view from the Mt. Ojibway fire tower
Part of my hesitance to stay at Daisy Farm was due to the fact that we already planned to stay there toward the end of the trip on our way back toward Rock Harbor. We had read that Daisy Farm is the largest and most popular campground on Isle Royale, and I admit I was poo-pooing it a little because I envisioned it being too crowded and social. Also, I was annoyed because I felt like a wimp. Ten miles on more familiar terrain is easy, and even though all the research we'd done clearly warned of the ruggedness of Isle Royale, experiencing is believing. In the end, changing our plans and staying at Daisy Farm was a good decision and would lead to a wonderfully long day of leisure at the very beautiful Moskey Basin on day three, not to mention change the trajectory of our trip in such a way that we ended up experiencing some truly amazing things later that we otherwise would have missed. 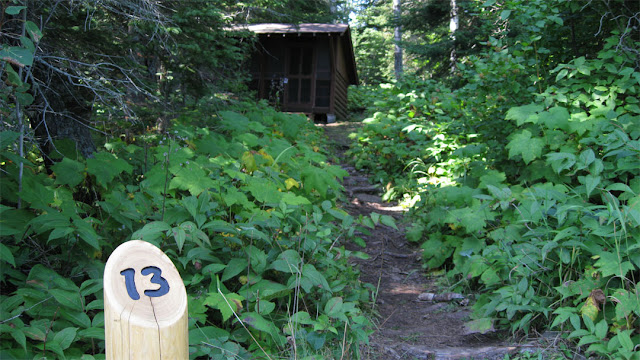 Daisy Farm actually proved perfectly nice and, although busy, it was relaxing and scenic and everyone was respectful of the quiet atmosphere. We were able to find an empty 3-sided shelter near the water, dropped our packs inside, set our sleeping pads out to inflate and went in search of a good spot along the harbor to filter water. After returning with enough to refill our drinking supply and for that night's dinner and washing up, we rested in our shelter and listened to the group next door discuss their plans for the following day: Daisy Farm to Hatchet Lake – 15.4 miles. I clearly couldn't hang with this type of crowd. At one point we heard, “Hey! A fox just ran through here with a rabbit in its mouth!” Another wildlife opportunity missed, but I couldn't manage to lift my head off my cushy Thermarest pillow. 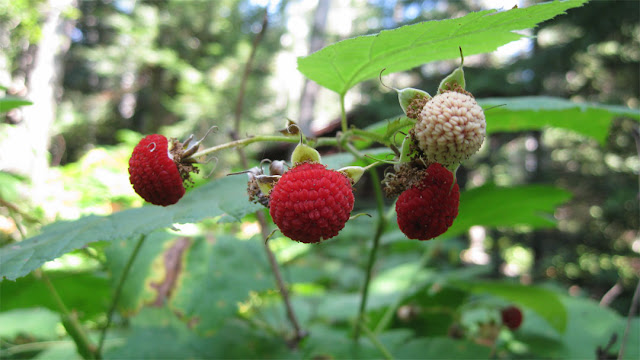 Thimbleberries
Later, once we had recovered, we did a little exploring of our surroundings. Thimbleberries grew everywhere and we collected a bowlful to add to our oatmeal in the morning. I didn't mention this about Lane Cove, but the outhouse was very clean and it was the same at Daisy Farm. Although we kept our belongings on lock-down and our eyes and ears peeled for the infamous kleptomaniac fox, there was no sign. After sunset, the moon rose huge and bright orange above the water of rock harbor in front of our shelter. We watched bats zoom out over the water to catch insects, and a big, very tolerant toad let me shine my headlamp on it and attempt to take it's portrait. 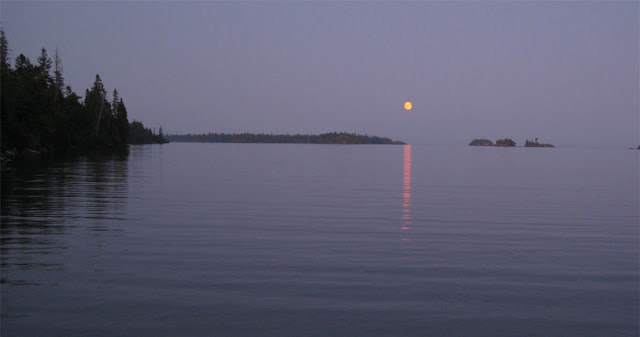 To be continued in: Isle Royale, Day Three: Daisy Farm to Moskey BasinMore photos from this trip can be seen here.

I am looking forward to your next installment. I also found climbing out of Lane Cove much more strenuous than the decent was.

Sorry to hear that you stomach dis-agreed with the days activity.

Your toad sighting must have been exciting indeed! Were you scared LOL!

There is nothing worse than fit people making you look bad. We get that here a lot. I can be climbing a mountain, feeling all buff when out of the blue someone will come by RUNNING the mountain as TRAINING for on of our ultra marathons. Talk about demoralizing. You just want to trip them. I have to remind myself that I am still in the top 10% of the US population when it comes to fitness.