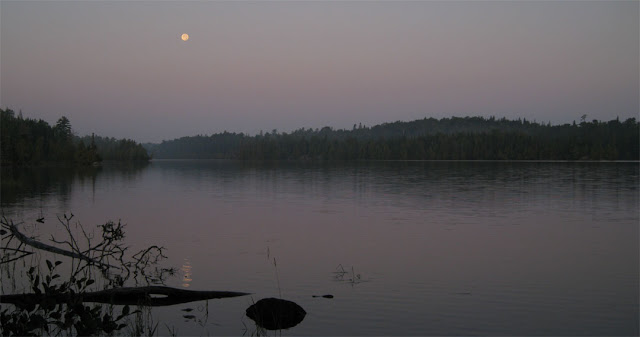 The orientation and permit process having taken close to an hour, we were ready to start hiking just before 1pm. Before leaving Rock Harbor, I used the hanging scale outside the camp store to weigh my pack: 34 pounds. This is a bit heavier than I'm used to; because we needed to carry enough food for 2 people for 8 days, it was necessary that I take some of the food. Normally, I take the tent, and Craig takes the food and cooking supplies. It was surprising how much weight the extra food added to both of our packs. 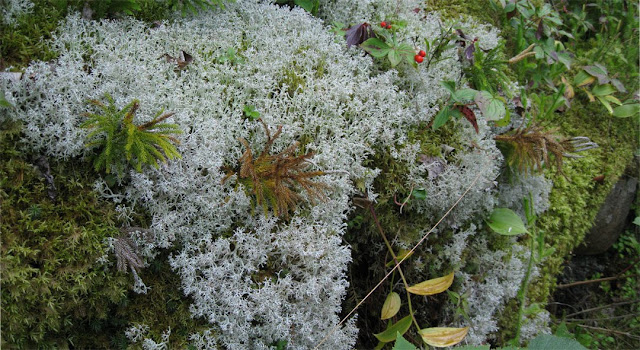 Our destination that day was Lane Cove on the north side of the island. We chose this location because, through our research and planning, it appeared to be off the beaten path from where most hikers go on their first day. It is more typical for people to head west from Rock Harbor with the destination of 3-Mile (so named because of its approximate distance from Rock Harbor. Those 3 miles are no joke, however – more on that in a future post.) or Daisy Farm campgrounds. This can result in trail congestion and full campsites. Our route consisted of heading west on Tobin Harbor Trail, then striking out north on Mt. Franklin Trail which would lead us up the Greenstone Ridge. Once at the top of the ridge, we would descend on Lane Cove Trail to our destination. Total miles: 7.1. 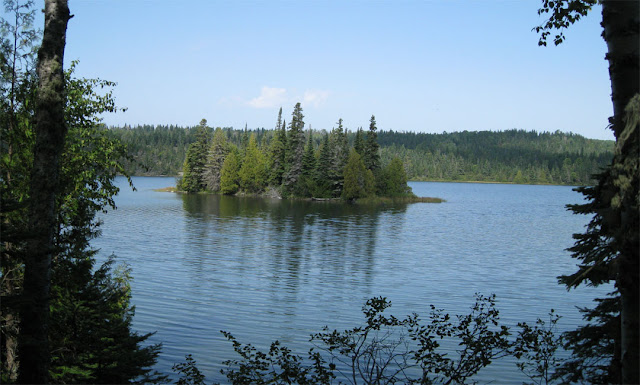 An important thing to note about the trails on Isle Royale is that they are unmarked. Signs are posted only at trail intersections. There are no reassuring arrows when ambiguity strikes, or mile markers to give a hiker an idea of how much lies ahead or behind. At times, the trails will leave the woods and disappear at slabs of bare rock that make up the many ridges of the island. When this happens, it is necessary to look for cairns – stacks of rocks used to mark a path – to find the way until the trail reappears. Our first day would mostly consist of well-defined trails that were easy to follow; however, the constant up and down of the terrain would take its toll on me, and more than once I wondered if I should have chosen somewhere easier for my second ever multi-day backpacking trip. 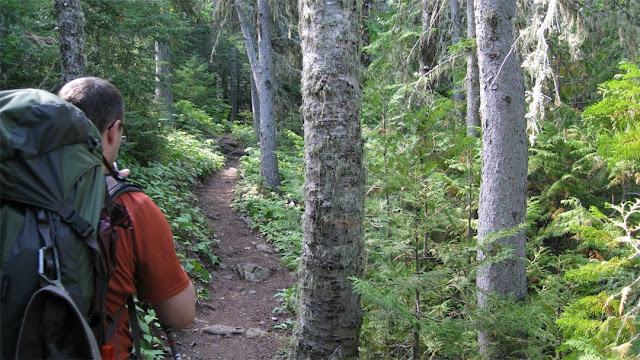 I was immediately alert and searching for signs of animals. From the stories I'd heard, I had high hopes for moose sightings. I clearly pictured them everywhere – munching leaves at the edge of the water, droplets glistening from majestic antlers as they posed in the sun for my camera. As this was the start of rutting season, we were prepared to give any randy-looking bulls adequate space (after catching award-winning photos), and to make sure we didn't get between any females and their calves who would no doubt be frolicking all over the trail, impeding our progress. Needless to say based on the tone of my previous words, we saw nothing the first day. Truthfully, the hiking was strenuous enough that within the first hour, I had put my camera away in favor of concentrating on putting one foot in front of the other, trying to breath, and pushing myself to stay within sight distance of Craig, who was working on controlling his pace so that I could keep up. 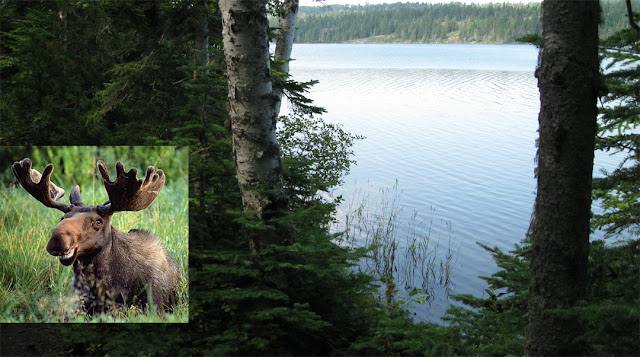 Perfect spot for a photogenic moose*

The descent on Lane Cove Trail involved 4 steep switchbacks along a very rugged trail strewn with boulders and huge tree roots. By this point I was paying attention to nothing except my deteriorating physical condition and attempting to stay upright as I very slowly navigated the steep trail. Once on a flat surface, Craig stopped me just as I was about to trample a pair of clearly defined wolf prints in the mud. This was a very encouraging site and my spirits rose at the realization that there are animals here after all! 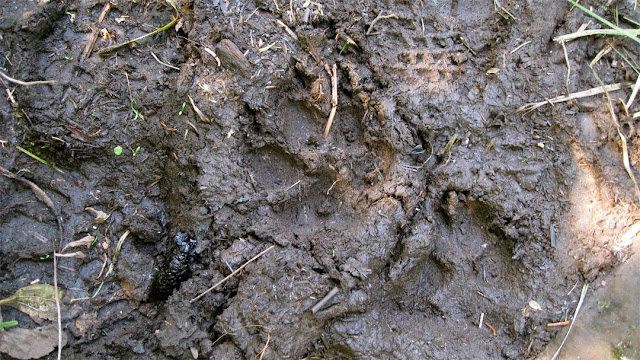 At 5:15pm we thankfully reached the campground at Lane Cove and staggered into the first tent site we saw (#2). There are no shelters at Lane Cove and the sites filled up quickly. Each site has more than one spot for a tent, and we ended up sharing ours with two sisters from the Houghton, MI area. One of them actually worked at the park many years ago, and the other was on her first ever backpacking trip. Evidence of her feelings on this matter were clear as she spoke to no one for an hour or so and looked like she was blatantly contemplating the murder of her activity-encouraging sibling. Even though I had recovered the use of my legs at this point and was very happily setting up our tent and thinking toward tomorrow's moose-filled adventure, I could sympathize. In the end, both new acquaintances turned out to be fun and respectful neighbors and we enjoyed their company. 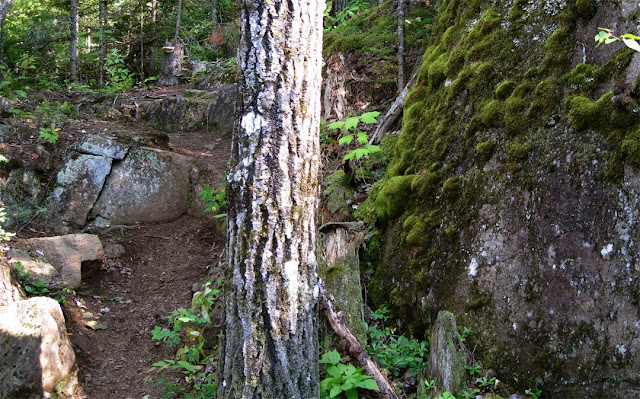 Lane Cove Trail - looking back after descending a switchback

When it came time to turn in, we had to decide what to do about food storage. This had been the subject of much debate while planning the trip to Isle Royale. Being used to camping in bear territory, we just could not warm up to the idea of keeping our food in the tent, a common practice on the island due to the absence of bears. Aggressive squirrels are known to chew through backpacks and tents to get at whatever might be inside, so we decided to hang our food bags just for peace of mind. Unfortunately, none of the trees in the vicinity had adequate branches, so we secured a line between two pines and hung the bags from the line. By the end of this process we were covered in tree sap, but the food was safe. 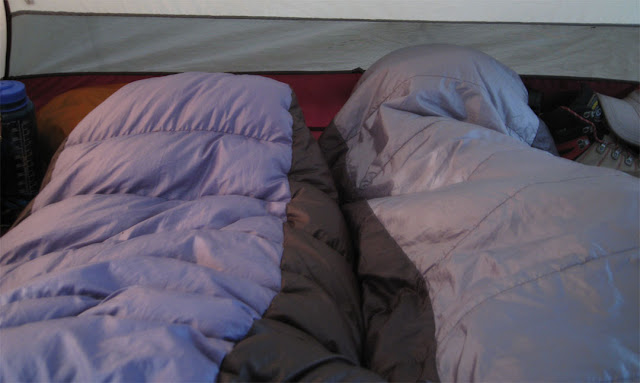 Sadly, this first day traveling to Lane Cove is mostly a blur, and I remember only a few things clearly about our campsite at the water's edge. The water itself was so cold that our ankles screamed in pain as we attempted to filter it. Luckily, our new friends had a collapsible bucket allowing us to retrieve water in large amounts, then filter it elsewhere, warm and pain-free. Later, I slept like a rock in our usually cramped and uncomfortable tent, only waking a few times to listen to loons calling eerily somewhere in the cove, and again at 5am when it suddenly got so cold that I had to cinch my sleeping bag hood around my face. At sunrise, we emerged from our cozy tent feeling refreshed and were immediately mesmerized by the sight of Lane Cove. The moon hung above the line of trees on the other side of the cove, and those trees were reflected perfectly in the water below them. Craig commented that it looked like a painting instead of a real place. My attempts to photographic it did not capture it very well. 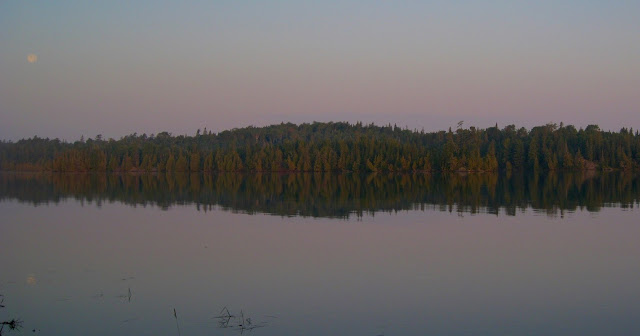 After eating oatmeal and drinking coffee, we packed up, said goodbye for the time-being to our camp friends, and began to drag ourselves up what we climbed down the day before.

To be continued in: Isle Royale Day Two - Lane Cove to Daisy Farm

More photos from this trip can be seen here.

*Smiling Moose inset found on the internets.
Posted by Nina at 4:34 PM

really beautiful story telling and pictures! I've lived in Michigan my whole life and never heard of this park--it's definitely on my list of things to do now!

Hi there. I am planning a trip to Isle Royale in the middle of Aug 2010 (solo) and want my first day to be from Rock Harbor to Lane Cove. My pack will be about 30-31 pounds but I am a pretty slow hiker. How long did it take you guys to hike it and what kind of physical condition were you in?

By the way, great storytelling and super pics!

Hi Sandy. It took us between 4 - 4 1/2 hours to get from RH to LC. I am also a slow hiker, but I hiked a bit faster that day than I normally would. Part of this was because we were worried about the sites filling up at LC, so we tried to hustle for the last few miles. Also, I was with someone who hikes a lot faster than I do.

As far as physical condition goes, I'm not in the best shape. I don't exercise regularly enough and could lose a few pounds. I walked a lot during the month prior to our trip, sometimes wearing a backpack with some weight in it to help prepare. If I don't have to rush, I'm usually fine. That's part of the reason I like to get an early start - I can take more time if I want to.

What time of day are you due to arrive? Are you heading out right after you get there? We felt a bit rushed to get to LC because we couldn't leave RH until around 1pm.

I am SO enjoying this journal and we are just beginning our planning. You are giving me the confidence I need for the backcountry. We have never camped more than two nights in the wilderness. we are studying and looking forward to the direct experience.

Izhpt,
Thank you and I'm glad this is helpful. This was truly an amazing trip for me and I hope yours is too. Let me know how it goes!