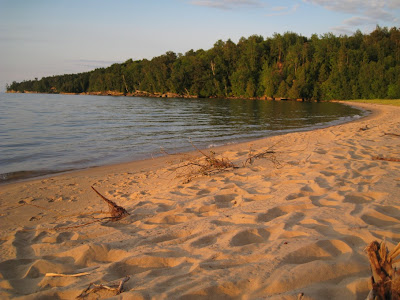 The morning of Day 3 began a bit testily as we realized neither of us had managed to collect as much extra drinking water as we had planned at North Point Beach the evening before. We debated walking back to the beach, adding an extra 1.5 miles to our day, or just pushing through to Trout Bay. We felt we had enough drinking water between us and for lunch we would just eat something dry instead of cooking anything requiring the boiling of water. Something told us we shouldn't delay in getting to the Trout Bay campsites, so we decided to go for it and set out around 9am.

The night before, we had been so exhausted and focused on finding a campsite, going swimming, 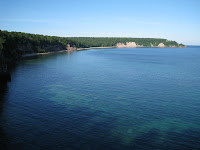 and going to bed early (I still wasn't sleeping and had stayed up most of the night reading The Summer He Didn't Die by Jim Harrison) that we failed to notice that a lookout point displaying North Point was practically right across the trail from our campsite. We began the day's hike with a wonderfully gorgeous view of the beach we had visited, rock formations, North Light just barely visible through the trees on North Point, and the point itself. It would have been a great spot to sit and watch the sun set the night before and I was really disappointed that I missed that opportunity.

Unfortunately, the breeze we had enjoyed for 2 days was gone and upon leaving the overlook, the trail immediately veered away from the cliffs and headed inland. Soon mosquitoes were attacking me with relentless ferocity and I decided it was time to get intimate with the insect repellent. The trail continued its uphill trend and the lack of air movement made it a sweaty trudge for a while. 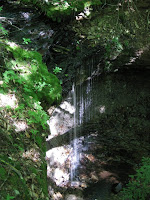 Due to the difference in temperature, we underestimated the amount of water we would drink but we were saved by the lucky fact that Michigan had a really wet spring and early summer this year. We heard trickling water all around us and encountered a handful of streams flowing out of the woods to run down the cliffs and empty into Lake Superior. I'm certain that if we hadn't had an abundance of rain earlier in the season, these streams would have been dry. We stopped about an hour into the day's hike to filter water from a small clear stream which meandered toward us over the mossy ground but disappeared under the trail. Once finished, we followed the sound of the water on the cliff side of the trail picking our way through the trees. Down the slope a short distance from the path we found a hidden rock ledge where the little stream abruptly dropped 5 or 6 feet creating a secret mini waterfall. I named it Craig Falls.

The next few hours were a bit tedious without the cliff views and with the constant buzzing of mosquitoes. However, around 1:30 pm we found ourselves at Trout Bay Overlook, which showed a big stretch of sandy beach to the southeast and the Pictured Rocks formation Indian Head away to the distant northeast. A huge sailboat resembling a pirate ship with white sails was making its way toward Munising, and I learned later that it was called Madeline and it had made its way here from Traverse City on Lake Michigan. 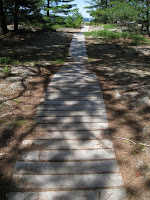 After a few more hours of hiking, we made it to the Tombolo: a section of land formed from a sand bar that served to connect Grand Island to its thumb. The thumb used to be a small separate island until the sand bar grew between them and began to develop its own vegetation. Back in the day, what is now Trout Bay was a narrow channel between the two. There were a few campsites along the tombolo that we knew were full, but a few forest service volunteers had informed us that the last two sites located right on Trout Bay's beach were available. These sites were still a few miles away at the end of a wide dirt road without the advantage of a tree canopy. Cursing the clear sunny weather, we marched on. Hot, sweaty, exhausted, and very mosquito-bitten (just me), we sincerely hoped that these campsites would be worth the effort to get there, and we were not disappointed. 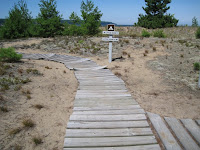 We chose Little Dune 2 – the very last campsite along this stretch of trail, some of which is covered with boardwalk to protect the delicate vegetation growing on top of the sand. Little Dunes 1 & 2 are wonderful campsites on the bay with a nice private stretch of sandy beach and since this area was not located in dense forest, there were no bugs to speak of. We pitched our tent at the back of the site in a shady area under a couple of pine trees, went swimming, and relaxed inside the tent with a steady breeze wafting in through the screen. We decided to leave the rainfly off no matter how cold it got later in order to see the stars above us and maybe even the Northern Lights if we got lucky.

A bit later after wolfing down a couple of huge portions of beef stew, we relaxed on the beach and watched the sun set over the expanse of land to the west that we had hiked through earlier 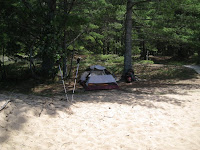 that day. This was easily our favorite campsite of the trip, and we decided that we would definitely need to come back someday just to stay here again. The island's thumb at the eastern end of the beach is supposed to be a wonderful place for kayaking, with sea caves to explore and a couple of campsites that are accessed by water. It is possible to hike to them, but there are no designated trails so traveling around the thumb would require bushwhacking and compass skills.

We weren't lucky enough to see the Northern Lights later that night, but the number of stars was incredible. I was happy enough to see the Little Dipper over the bay right in front of our tent, which is something I never see in Metro Detroit. A loon called out once while we watched the moon rise through the trees to the south and just one more time as we drifted off to sleep.

To be continued in Grand Island: Day 4
Posted by Nina at 4:48 PM

All your photos were gorgeous - enjoyed hearing about your trip!
Thank you for visiting my blog and I was glad I got to find yours!

Well we had a wonderful time in the UP. I have started to blog it but have barely made it past our first day.

In the middle of the week we stayed in a cabin on Shelter Bay, which looks out on Grand Isle. I had no idea there was so much to do there as well.

I think you could spend a week just in the Grand Isle, Pictured Rocks area.

Your trip was certainly warmer than ours. There was a gale blowing on Lake Superior for several days, which made the Lake rage.

Thanks again for the tips. Do journey to Colorado sometime.